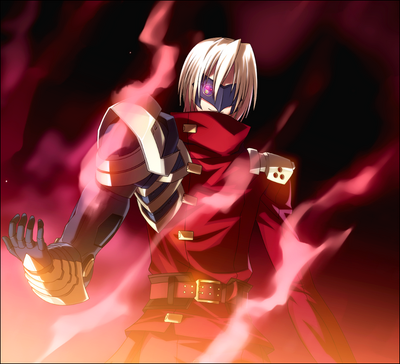 Powers and Abilities: Superhuman Physical Characteristics, Immortality (Types 1, 3, and 7), Regeneration (At least Low-Mid, possibly higher. Can regenerate any missing limbs by absorbing elementary particles in the surrounding environment), Enhanced Senses, Gravity Manipulation, Spatial Manipulation, Black Hole Creation (Only in Shadow Form), Pseudo-Flight/Levitation via gravity manipulation, Shockwave Generation, Can breathe in space with no consequence, Resistance to ultra high and low temperature attacks and Spatial Manipulation (Was not bothered by Ryouga and Jun’s abilities during their encounter)

Attack Potency: City Block level (Defeated Alexander in direct combat. The latter of which was dozens of times stronger in his Shadow Form at the time and was much superior to his Bright Form that granted him enough power to take down skyscrapers). Can ignore conventional durability with Gravity Manipulation and Black Holes.

Speed: Hypersonic+ (Should be as fast as Alexander, the latter having reacted and dodged Ray’s ray gun shells, which he can shoot at Mach 10)

Stamina: Infinite (Imaginators do not need to eat or sleep and fight on indefinitely even while in space and without tiring while using astronomical amounts of energy with their attacks)

Range: Melee physically, 187 meters with Gravity Manipulation (Covers this far with his powers)

Intelligence: Is a clever fighter and is very analytical, able to view the environment around him and is able to discern the nature of his opponents' abilities within a few seconds (as he was able to discern what Jun’s spatial manipulation powers can do just after taking a single blow from her). But becomes something akin to a mindless berserker when his mask is taken off, no longer able to think rationally, aggressively attacking everyone around him regardless of whether they are friend or foe.

Weaknesses: Binding of Darkness only allows him to freely manipulate gravity in a limited manner (being only able to affect up to 187 meters). Will go into a berserk-like mindset when his mask is taken off, making him unable to act rationally in battles that may require it.

Retrieved from "https://vsbattles.fandom.com/wiki/Apollo_(Zero_Infinity_-_Devil_of_Maxwell)?oldid=4106716"
Community content is available under CC-BY-SA unless otherwise noted.