VS Battles Wiki
Register
Don't have an account?
Sign In
in: Characters, Star Trek, TV Characters,
and 28 more 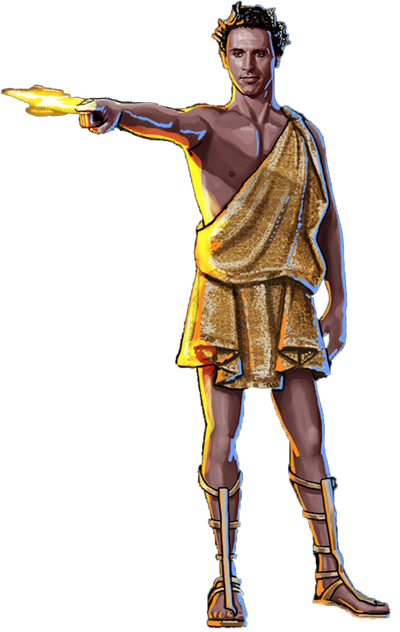 In Greek mythology, Apollo was one of the most important Olympian gods. The son of the god Zeus and the goddess Leto, Apollo was often associated with prophecy, medicine, music and poetry, archery, and the care of flocks and herds.

He was also frequently associated with the higher developments of civilization, such as law, philosophy, and the arts. Finally, in Greek mythology, Apollo driving his chariot through the sky was associated with the movement of the Sun. He was a twin brother to Artemis, goddess of hunting, though Athena was also a sister of his as well.

In 2267, the USS Enterprise encountered Apollo on Pollux IV. There, they learned that the Greek gods were, in fact, a band of explorers who had visited Earth five thousand years earlier and established themselves as gods to the people of that era. From things Apollo said to Carolyn Palamas, it seems that they may actually have, in some sense, considered themselves to be gods, but it is clear they also knew they weren't gods in the same sense the ancient Greeks believed them to be.

Attack Potency: Unknown. At least Island level (Stated he once stretched out his hand and Earth "trembled", can easily crush Federation starships with his hand-shaped force field, expends an independent source of energy in his body), possibly higher (Created a huge local storm while maintaining a hold on the Enterprise, his temple contains a vast source of energy that the ship's phasers needed time to destroy) | Unknown

Lifting Strength: Unknown, far higher with his force field (Held the Enterprise in place and prevented it from moving)

Stamina: Has an extra organ in his chest which he taps a powerful field of energy generated within his temple and often needs to recharge himself to stay active.

Intelligence: Knew only of ancient values and way of life, accustomed to obedience from humans

Note: Apollo at one point claimed he could wipe out a man with a gesture, and bring him back again as easily. But he never demonstrated this particular ability.