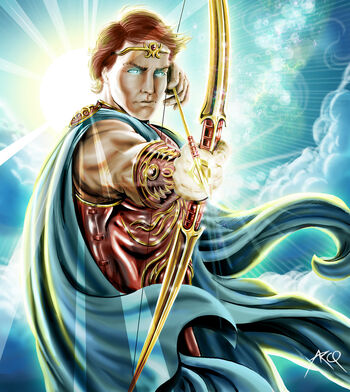 Apollo is one of the most important and complex of the Olympian deities in classical Greek and Roman religion and Greek and Roman mythology. Apollo has been variously recognized as a god of music, truth and prophecy, healing, the sun and light, plague, poetry, and more. Apollo is the son of Zeus and Leto, and has a twin sister, the chaste huntress Artemis.

Classification: God of the Sun, Music, Light, Healing, and Prophecy

Attack Potency: High Universe level (He has also shaken the universe in battles with Poseidon and should be on par with his divine siblings. Beat Ares in a boxing match at the first Olympian Games. With his power, he moves the sun using his chariot around the Earth)

Speed: At least Massively Hypersonic (Moves the sun around Earth with his chariot by his own power. Can get to Mount Olympus in the speed of a thought, should be on par with Ares who can move at the speed of a thunderbolt. Beat Hermes in a race at the first Olympian Games), likely Relativistic

Lifting Strength: Stellar (Moves the Sun with his own power)

Durability: High Universe level (He has withstood hits from his uncle Poseidon)

Standard Equipment: His lyre, his golden bow-and-arrow, his chariot, his wreath

Intelligence: Very high (God of the arts and music and is also known for his intelligence) 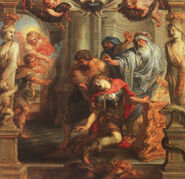 Death of Achilles (Orchestrated by Apollo)

Apollo's Lyre
Add a photo to this gallery