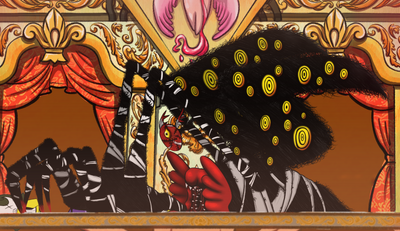 Apocalypse Bird is created when Big Bird, Bird of Judgement, and Punishing Bird fused together in an attempt to protect the Black Forest from monsters.

In the Black Forest, these three birds wished to protect their home from monsters and wants everyone to be happy. When a prophet they rejected warned them that tragedy after tragedy will fall to the forest, and that a monster that will devour all and make it so that the moon and sun will never shine. These valiant birds wishing only the best for everyone did their best in order to help.

Big Bird, with his many eyes, watched over the forest to seek trespassers. Big Bird’s eyes can see very far, and things we can’t see. Then somebody said, “But what should we do if the monster comes in a night when everyone’s asleep?”. Big Bird became worried, so he burned all of his feathers to make an everlasting lantern. Now, creatures in the forest were under Big Bird’s watch day and night.

Long Bird weighed the sins of creatures that enter the forest to keep peace. Long Bird’s scales could measure every sins, and were fair and just. Then somebody said, “But what should we do if the scales don’t tip to any direction?”. Long Bird became worried, so he made scales that tip to only one direction so he can get the result under any situation.

Little Bird decided to punish bad creatures with his beak. Then somebody said, “But your beak is so small, no one would find it painful!”. Little Bird became worried, so he split his mouth to make it big enough to devour any creature in one bite.

Yet all their improvements only caused more and more tragedy, more fights, and for their forest to lose its peaceful touch. With one more attempt to help stop everything as the forest was too big for them alone, they joined their strength together to be able to help everyone. With Apocalypse Bird's appearance, darkness fell on the forest causing chaos across it with all of the creatures that they wished to protect leaving forever.

Apocalypse Bird ended alone in the Black Forest which it tried to protect, without sun or moon. The prophecy has been completed.

Powers and Abilities: Superhuman Physical Characteristics, Enhanced Vision (With Big Bird's eyes. Can see up to hundreds of kilometers away and observe all creatures in the black forest), Mind Manipulation, Madness Manipulation, Fear Manipulation (Passively inflicts fear into those who see it. Can directly attack the mind and eventually drive people to insanity. Its stare can hypnotize others), Resistance Negation (Can ignore resistance to physical and mental attacks), Death Manipulation (Can deal PALE type damage), Darkness Manipulation (Casts night over the facility with its presence. No moon or sun rose with its presence), Non-Physical Interaction (Can harm non-corporeal entities and abstracts), Teleportation and Portal Creation (Can create portals and teleport around), Technology Manipulation (Able to prevent any sort of light from rising, even from a lighter. Can cause other containment facilities to fail and free other Abnormalities), Possession (Can possess enemies from afar and lure them to itself), Energy Projection (Can shoot out beams from its wings), Limited Absorption (His eggs can absorb RED, BLACK and PALE type damage separately), Body Manipulation, Fusion (Became the Apocalypse Bird thanks to the other birds' manipulating their bodies), Possibly Time Manipulation (Long Bird was said to be able to hide time. The sun and moon never rose again in the Black Forest. Can prevent the manager to speeding up or stopping in game as long as long bird egg are not destroyed) and Statistics Amplification (Deals more damage the more damage he receives thanks to the Blessing of Apocalypse Bird's EGO weapon), Regeneration (Mid-High, possibly High. Can regenerate from being turned into ashes. Possibly comparable to WhiteNight), Resistance to Time Manipulation (Immune to the effects of the Backwards Clock), Resistance to Physical Attacks, Mind Manipulation, Soul Manipulation and Death Manipulation (Resists RED, WHITE, BLACK and PALE attacks, which corresponds to physical attacks, mental/spiritual attacks, combinations of physical and mental attacks and death attacks, respectively. Can resist the passive fear aura of other Abnormalities. It's noted that Apocalypse Bird is immune to all types of damage and his eggs must be destroyed in order to make him retreat, but this might be a Game Mechanic), Resistance to Resistance Negation (Reduces damage taken from BLACK damage, which ignores usual resistances to physical and mental attacks) and Reality Warping (Immune to Yin Yang Dragon's abilities), Energy Manipulation (Can produce Enkephalin), limited Resistance to Power Nullification (Can eventually break through the Qliphoth Detterance, which drains abnormalities of their power)

Speed: High Hypersonic+ (Should be superior to Complete Food and comparable to fellow Aleph Class Eternal Meal, both capable of tunneling through the underground facility within a fraction of a second)

Durability: At least City Block level (As an Aleph Abnormality, should be able to take a lot of damage. Ignored any sort of damage in the facility)

Stamina: Likely very high like all other Aleph Class Abnormalities.

Range: Melee range, Hundreds of kilometers with sight thanks to Big Bird's eyes and Scales of Judgement Bird.

Standard Equipment: None but can produce E.G.O. equipment

Intelligence: Wise, able to judge any sins anyone commits.

Weaknesses: Its three eggs scattered around the map is its weakness. Damaging them can hamper Apocalypse Bird's abilities and make it retreat. Depending on which egg is destroyed, certain abilities can be negated (Separately Possession, an ability that devours others, and an ability that deals soul damage to all in the area). However, they are still tough to destroy and Apocalypse Bird can move to defend them anytime.