VS Battles Wiki
Register
Don't have an account?
Sign In
Advertisement
in: Tier 6, Tier High 6-C, Tier 3,
and 26 more 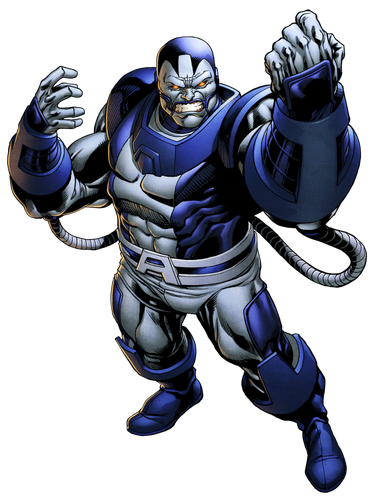 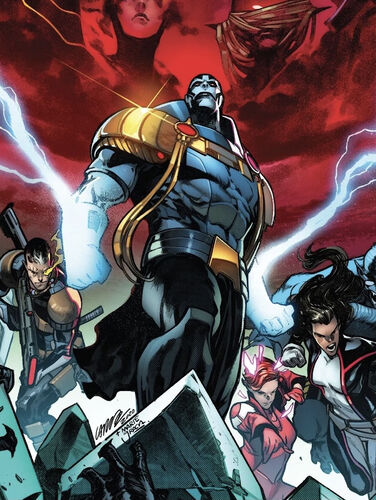 Five millennia ago in Ancient Egypt, the first mutant was born.

His grey skin and blue skin pattern resulted with him being abandoned by his parents to die in the desert. However, the infant's cries were heard by a band of feared nomadic raiders known as the Sandstormers. Seeing potential in the infant, the bandits' leader Baal of the Crimson Sand raised him like a son and named the child "En Sabah Nur" or "First One".

In time, having assumed the identity of Pharaoh Rama-Tut, Kang the Conqueror learned of En Sabah Nur's inhuman power and sent his army to slay the boy because the horrible deeds he is destined to commit. Though Baal and his band were slaughtered, En Sabah Nur survived and decimated the pharaoh's army with his raw power, taking control of Egypt and the technology that the time-traveler left behind.

In time, being worshiped as a god, En Sabah Nur learned that he is an ageless immortal of aging and used that knowledge in a campaign to make the world one of "growth, judgment, and destruction". Eventually, En Sabah Nur acquired the technology of the Celestial and converts himself into a biomechanical life form.

This left him weakened as his high priests, fearing, sealed him away in his Eye of the Ages status chamber and placed it in the Himalayan Mountains behind three doors. But by the 1800s, En Sabah Nur used his telepathy to contact Nathaniel Essex whom he gave the means to extend his own life in return for his release.

Once freed, now known as Apocalypse, En Sabah Nur became disillusioned with the modern world and since made attempts to "cleanse" humanity and create a new world order.

Powers and Abilities: Self-Molecular Manipulation and Body Control (Apocalypse explains his control over his body is so exact, that he can rearrange and restructures its molecular make up.[3]), Statistics Amplification, Superhuman Physical Characteristics, Preparation, Elasticity (Stretches his body to attack Beast.[3] Knocked away Jane Foster.[4]), Shapeshifting (Apocalypse takes the appearance of normal-looking, princely, African male.[5]), Weapon Creation (Apocalypse fights through a vampire army while shifting his hands into various weapons.[6] Apocalypse conjures a war hammer from nowhere.[7]), Non-Physical interaction (Can adjust his molecules to match those of Kitty Pryde and harm her.[8]), Adaptation (Apocalypse's immune system quickly adapts to the Techno Organic virus that Sinister creates.[9]), Energy Manipulation and Energy Projection (Regularly turns his arms into cannons.[8] Can shoot beams from his eyes strong enough to harm Thor. [10] Apocalypse easily takes down Clan Akkaba mages with a single energy blast.[7]), Resurrection and Immortality (Types 1 & 3. Apocalypse confirms that as an External, he has the benefit of rebirth if he is killed.[11] So long as a trace of Apocalypse's physical essence exists, Apocalypse can always come back. Even from a cell or a drop of blood can be enough to create a clone or turn a host body into something fit for Apocalypse's soul.[12]), Teleportation (Apocalypse teleports his Light Riders back to Manhattan from Kazakhstan.[13]), Astral Projection (Apocalypse astral projects to Captain Britain (Betsy Braddock) at the Braddock Lighthouse.[7]), Illusion Creation (Apocalypse creates an illusion of Genesis.[14] Showed the Hulk a projection of the past.[15]), Flight (Apocalypse conjures jets on his boots to maneuver in space and dodge an energy blast from the High Evolutionary. [16] Through telekinesis.[17]), Limited Air Manipulation (Apocalypse turns his hand into a large fan to suck up Unveil in her mist form before forming a blower to shoot Unveil in mist form at Eye Boy and Dazzler. [8]), Regeneration (Low-Mid. Immediately regenerates after getting his arm shot off.[8]), Telepathy (Capable of communicating with Psylocke while she was in Otherworld.[18]), Possession (Apocalypse transfers his soul from his old deteriorating body to his new host.[19]), Telekinesis (Apocalypse telekinetically takes apart "the Finch" and puts it together attached to his body.[20] Apocalypse seemingly cuts off Healers airways telekinetically.[21]), Extrasensory Perception (Apocalypse can sense the magical energies surging through the crystal stones created from long dead mutants.[22] Capable of sensing people through their psionic presence.[18] Apocalypse can see people even when they are Invisible.[16]), Weapon Mastery (Several including swords, axes, hammers, and maces.), Size Manipulation (Young Apocalypse increases his size and strength against an armed-group of Egyptian soldiers.[23] Apocalypse alters the size of his face and no-sells Loki's blitz.[24]), Energy Absorption (Kinetic [25], energy from Celestial technology[25], and likely others),Supernatural Willpower (Capable of resisting the Helm of Annihilation.[26]), Possession (Apocalypse transfers his soul from his old deteriorating body to his new hosts. [19]), Deconstruction (shown here.[20]), Magic (Wrote a grimoire on everything he knows, also dissected Morgan Le Fay to study her magic.[27]. Is shown engaging in ritual spells with his coven, the other Externals.[28] Selene notes Apocalypse's skill in magic but claims he knew less than her.[29]), Forcefield Creation (Apocalypse conjures a force field to contain and protect Caliban.[30]), Healing (Apocalypse regrows Eye Boy's hands.[13]), Technology Manipulation, Self-Sustenance (Type 1. Can survive in space.[16]), Limited Life Manipulation (With help from the other Externals, transferred Candra's life force energy from her body into a gemstone.[28]), Resistances to Telepathy and Mind Manipulation (Manages to deflect Jean Grey's telepathic assault.[31]), Sound Manipulation (Takes Bei the Blood Moon's "doom note".[32]), Temperature Manipulation (Says he is immune to and can resist cold to Iceman.[30] Took an attack from Rogue using Sunfire's powers.[33]), Electricity Manipulation (Apocalypse survives the combined lightning attacks of young, unworthy Thor and Jane Thor.[4])

Attack Potency: Varies (His control over the molecules of his body allows him to summon further power for himself.[1] Apocalypse restrains himself to a degree against other mutants as his goal is to test them to ensure they will be powerful enough to save the mutants trapped in Amenth, including his family.[34]), Large Island level normally (Fought Ikaris and forced/allowed him to retreat so people would know what it meant to oppose him.[35] Forced young Thor to retreat, and according to narration, almost killed him in one attack. Lost in their second encounter due to Jarnbjorn's enchantment.[10] Restrained Banner-less Hulk before willingly releasing him. [15] Fought evenly with the High Evolutionary after having bragged about the control over his own molecules & modifying his armor.[16]), up to Galaxy level (While in an increased size, fought evenly against past Odinson Thor and Jane Foster Thor simultaneously, but was eventually overpowered.[4]) | Likely Multiverse level+ (After absorbing some of the strongest mutants on Earth, he was said to have increased his power to rival or exceed a Celestial's)

Speed: Varies, At least Massively Hypersonic+, at most Massively FTL+ combat speed and reactions (Easily caught Quicksilver.[25] Was capable of catching Jarnbjorn and throwing it back at Thor.[10] Fought both Thors at the same time.[4])

Lifting Strength: Likely Class T (Should be no weaker than Colossus), Higher via statistics amplification and size manipulation

Durability: Varies, Large Island level normally (Comparable to characters like Thor and Hulk. Took little to no damage in his skirmish with Loki.[24] Took a blitz from second key Rogue.[36] Takes a blast from the High Evolutionary.[16] ), up to Galaxy level (Although he was defeated, fought and took attacks from Odinson and Jane Foster.[4]) Likely Galaxy level in Celestial armor (Apocalypse was initially unfazed by Jarnbjorn, it wasn't until Thor enchanted it to be capable of piercing the armor of the Celestials that he was wounded, implying this armor to be comparable in durability to theirs.[10]) | Likely Multiverse level+

Stamina: Superhuman (Comparable to the likes of Thor); formerly depended upon compatibility with host body

Intelligence: Extraordinary Genius. Apocalypse has knowledge of certain areas of Biology, primarily genetic engineering and mutation. Capable of understanding technologies that are far in advance of contemporary science, including Celestial technology to an extent. He also has knowledge about magic and astrology.

Weaknesses: Currently none notable; formerly needed to transfer host bodies due to burning them out.

Key: Normal | Enhanced by the power of "The Twelve"

Note 1: Before making any changes to this page, please read and follow the Power-scaling Rules for Marvel and DC Comics.

Note 2: Although Apocalypse can regenerate from a single drop of blood, the nature of it is overwriting the genetic code of a vat of blood and organs, and requires outside help to activate.