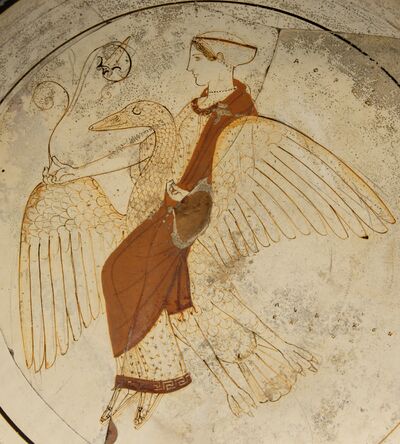 Aphrodite is the Greek goddess of love, beauty, and sexuality. Aphrodite's parentage is disputed. Accoriding to Theogony, Aphrodite was born out of Uranus' severed genitalia when Cronus tossed them into the sea. According to The Iliad, however, Aphrodite was born into (yet another) illicit relationship between Zeus and Dione. The former account would make Aphrodite the oldest among the 12 Olympians. Aphrodite was often portrayed as a nude figure in Greek mythology, which made finding a rule-abiding image for this profile difficult.

While older accounts listed her as either an unmarried consort to Ares or simply unmarried, later accounts would have Aphrodite's consort be Hephaestus: the God of the Forge. The most famous of these accounts stated that Zeus hastily had Aphrodite wed to Hephaestus to prevent the other gods from fighting over her, much to Aphrodite's dismay. In response to this, Hephaestus crafted an undergarment for Aphrodite that would accentuate her breasts, which, while questionable, would make Aphrodite more irresistable to men.

Name: Aphrodite, Venus, Kytherea, The Rejecter, Root of Life, Seedsower of Being, Midwife of Nature, Hope of the Whole Universe.

Powers and Abilities: Superhuman Physical Characteristics, Immortality (Types 1 and 5), Shapeshifting (Turned into a fish to escape Typhon.), Empathic Manipulation (Represents love and beauty; often viewed as irresistable to men; in Roman accounts, she gave birth to Eros.), Plant Manipulation (Gave birth to Priapus, who grew plants through very questionable means; her blood turned roses red), Curse Manipulation (Cursed the women of Lemnos with foul body odor), Fear Manipulation (Gave birth to Phobos and Deimos, the daimons of fear and terror), Transmutation (Turned Acmon into a shearwater. Transformed the god Nerites into a shellfish.), Petrification (Turned Anaxarete into stone.), Animal Manipulation (Caused king Glaucus' mares to fall into a frenzy and tear him to pieces.), Biological Manipulation (Bestowed great beauty onto the Koronides. Cured Ladike of his impotence.), Life Manipulation (Granted Pygmalion's ivory statue life), Smoke Manipulation (Cause a mist to surround Aeneas), Telekinesis (Cause spears and arrows aimed at Aeneas to only graze his shield), Power Bestowal (Gave Aeneas immortality. Gave Hermaphroditos the ability to make men effeminate), Water Manipulation (In Metamorphoses, create a firery, hot spring at the gates of Rome to keep it from being invaded), Age Manipulation, Madness Manipulation (She presides over the erotic divine madness along with Eros.), Flight (In The Anacreontea, she flew over the white sea fast enough to make breaking waves)

Attack Potency: High Universe level (Comparable to other Olympians, but the weakest among them. Controls the star Hesperos. Fought the giant Mimon.)

Lifting Strength: At least Regular Human (Carried her son Aeneas off the battlefield during the Trojan War.)

Intelligence: A goddess with thousands of years of experience. Gave Dexikreon advice on how to calm his ship by freighting it with fresh water. Told Hippomenes how to win the race against Atalanta by throwing 3 golden apples. Instructed Paris how to build ships to kidnap Helen of Troy. She is also the goddesss of seduction persuasion through words which she has taught to mortal men. Aphrodite is a skilled charioteer.

Weaknesses: Easily angered by refusals to procreate or vows of virginity. Often refuses to associate herself with anything she deems ugly. Impulsive