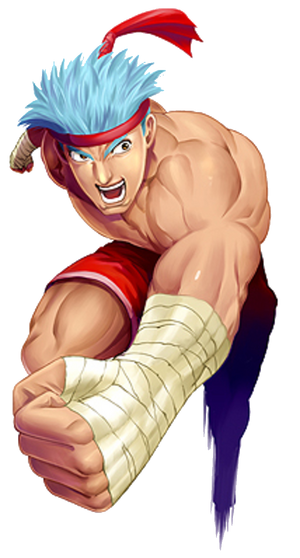 Apachai Hopachai (อาภาไชย หอภาไชย) is known as the Muay Thai "God of Death" and Muay Thai master at the Ryozanpaku. He is also shown to have been trained in Muay Boran and Muay Thai, though he only practices Muay Boran at night only for the sake of upholding the traditions of the fighting style, and even tries not to show it to Kenichi to protect him because it is very dangerous.

Attack Potency: City-Block level (As a master of Ryozanpaku, he should be on same rank with Akisame Koetsuji)

Speed: At least Supersonic, likely higher (Much faster than Kenichi)

Durability: City-Block level (Has taken blows from other Master-class fighters.)

Stamina: Very high (Was able to fought and defeated a strong enemy, eve he had a large wound in his torso on that time.)

Intelligence: Apachai showed tremendous physical prowess and natural talent for combat. Even as a small child, he was able to easily defeat several adult men without even a scratch. Apachai is also shown to be able to quickly learn skills he truly sets his mind to, such as becoming good at Othello in wanting to beat Honoka. In doing so, he can easily defeat most of Ryozanpaku's master and only narrowly lost to the immensely intelligent Akisame.

Weaknesses: Apachai can be extremly gullible at times, and is apparently unaware of the illegal activities he has taken part in over the years, such examples are him answering the phone with threats, and protecting a slavery ring without any idea of what it was. This can lead him to be easily manipulated.

Retrieved from "https://vsbattles.fandom.com/wiki/Apachai_Hopachai?oldid=4647376"
Community content is available under CC-BY-SA unless otherwise noted.