VS Battles Wiki
Register
Don't have an account?
Sign In
in: Characters, Nasuverse, Mahōtsukai no Yoru,
and 23 more 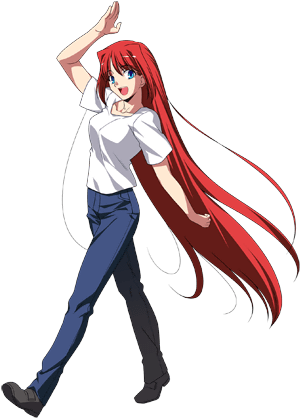 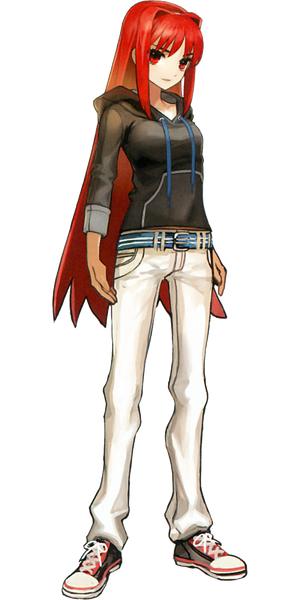 Aoko Aozaki also known as Miss Blue and Magic Gunner is the Fifth Magician. Originally raised at a distance from magecraft, as her elder sister was chosen to be the family successor, she was suddenly approached by her grandfather at the age of fifteen and trained in magecraft so that she could inherit the Fifth Magic. As a result, her relationship with her sister is incredibly poor.

Tier: 6-C, much higher over time with her magic's side effects

Age: 17 years old during Mahoutsukai no Yoru, at least 25 during Tsukihime

Powers and Abilities: Superhuman Physical Characteristics, Soul Manipulation in the Fate/Extra world, Magic, Absorption (Can absorb and collect magical energy from her surroundings for her spells), Energy Manipulation and Projection, Time Manipulation and Travel (Can amplify her stats and abilities by borrowing time, can move around the point in which an event has happened, such as moving the point in which someone dies into the future to resurrect them, can move outside of the time axis, and potentially even send attacks to another point in time), Expert Martial Artist, Curse Manipulation (Cursed Touko to transform into a toad if she returned to Misaki within ten years), Resistance to Magic (All magi have basic resistance to magical effects) and Time Manipulation (Was unaffected by Dust of Osiris' time loop)

Attack Potency: Island level (Can melt a large quantity of ice if not for its magic resistance, can fight on par with Servants such as Saber. Even Arcueid Brunestud would only have a 70% chance of defeating her), much higher over time with her magic's side effects (The sheer amount of energy she has to use and the time paradoxes she causes will greatly accelerate the heat death of the universe, and will ultimately result in its definite destruction).

Speed: Massively Hypersonic (Can keep up with Servants like Saber).

Striking Strength: Wall Class (Can snap trees in half with kicks even before she gains power). Island Class with reinforcement

Stamina: Very high. Aoko's use of magical energy is extremely efficient, said to be comparable to a car that can drive a thousand kilometers on a single liter of gasoline.

Range: Standard melee range. Hundreds of Meters with magecraft. Universal+ with the Fifth Magic (Can send attacks and phenomena to other points in time across the universe).

Intelligence: As the "Magic Gunner", Aoko is an infamous and powerful magus who specializes in combat and destruction. While she is formally a below average magus, she is considered an unmatched genius when it comes to destruction and the efficient use of magical energy. Her sheer destructive firepower and combat skill makes her one of the few capable going head to head against Servants in combat. Even the likes of Arcueid would only have a 70% chance of beating her. When incorporating her skill as a martial artist she is able to act as a melee-type magus. In addition, Aoko is also very knowledgeable when it comes to magical phenomena.

Weaknesses: Aoko's magical skills and knowledge are primarily tailored towards destruction, so she lacks versatility.

Magecraft: Aoko is an incredibly straightforward but competent magus specializing in the simple art of destruction. While less skilled in other kinds of magecraft, when it comes to destruction, she is unmatched, possessing the firepower to fight on par with Servants. Her incredible firepower stems from her extremely efficient use of magical energy and her magic circuits' structural durability, quality of output, fuel efficiency, and extraordinary rotation speed, which is so fast that it generates sound and surpasses the speed of the blood flow. Even though she is not the most skilled magus, magical skill and combat skill are two different things entirely, and in this department, she is a step above most other magi.

High-Speed Incantation: A skill that Aoko utilizes to chant incantations at a faster rate. Using it she is able to cast and fire her magic bullets at a far faster rate, simply by chanting "Bullets, Deploy" allows her to fire twenty magic bullets at once. Even Touko Aozaki is unable to see when Aoko starts the spell and loads the bullets.

Starmine and Starbow: Her main form of magecraft, which follows a system of magical processing, conversion, and output through numerology. She uses magical energy in its purest form, firing bursts of heat and energy as high-speed, high-power bullets while utilizing her magic circuits as her "barrel". Starmine refers to spells whose energy has a fluid motion, while Starbow refers to those whose energy has fluctuating applications. She is also able to apply Starmine and Starbow in melee combat, by expelling her magical energy from her limbs at close ranges for incredibly destructive effects. In addition, she also has knowledge on Kabbalah thaumaturgy and Notarikon.

The Fifth Magic: The fifth true magic to be discovered, also known as Magic Blue. While its exact domain is unknown, it is heavily associated with time travel and time manipulation, along with the advancement of civilization and, ultimately, extinction. Whereas magecraft is the realization of something that technology can accomplish but through supernatural means, Magic is a miracle, something that is impossible through science. Using the Fifth Magic, Aoko can accomplish a variety of effects, and uses them skillfully.

She can exchange time and move events through the time axis, allowing her to do things like moving someone's death into the far, far future to resurrect them in the present. In the same way, she can borrow time to receive the 'time' of her future self, granting her all her future skills, experience, and knowledge, coloring her hair red in a Redshift. The time she borrows in this way will eventually be returned. By moving outside of the time axis and making use of repeated instances of time travel, she can dodge attacks, potentially even sending the attacks to different points in time or layering countless versions of "herself" over her body.

However, the Fifth Magic is not like the Second Magic. It does not rewrite the world. To make the changes she wants effectively permanent, Aoko must handle her Magic carefully. By moving someone's point of death into the future, she may effectively truly resurrect them, but the displacement of mass and the energy used to accomplish such a thing is immense. This reckless use of her magic will ultimately accelerate the destruction of the universe itself, making the heat death of the universe more and more likely and result in the breakdown of order.