VS Battles Wiki
Register
Don't have an account?
Sign In
Advertisement
in: Tier 7, Tier 7-A, Characters,
and 29 more 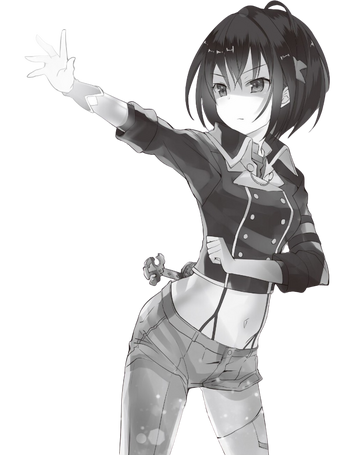 Aoi Hayanose is one of the various Sages in the Instant Death series and the main antagonist of Volume 2. She’s a Sage in charge of making sure that Lost Sages are taken care of until she is requested to deal with a certain duo of Japanese due to one of them being able to use a mysterious Instant Death ability.

Powers and Abilities: Superhuman Physical Characteristics, Immortality (Type 3 and 8. Sages can't die as long as their Sage Stone exists), Limited Fate Manipulation (By manipulating the plot of the destiny she can appeal to Fate to favoring her, even being able to overpower the protection Fate itself gives to high destiny value existences), Plot Manipulation (Aoi can manipulate the plot of destiny; like a movie protagonist she is protected from death as long as her death is "not interesting"), Reality Warping, Causality Manipulation (Can change events as she believes), Regeneration (Low-Mid; Recovered from organ damage caused by Yogiri’s madness manipulation after a few seconds. Sages can regrow lost limbs with their regeneration), Power Nullification (Can invalidate the ability of others in a diverse numbers of ways through her sage skills and her own abilities) and Reactive Evolution (Can restrict abilities, render them unusable, and become immune to them[1][2]), Light Manipulation, Magic, Telepathy (Via her knife), Precognition (Can read the script of the world that is Fate), Information Analysis (She can see the abilities of others, weaknesses, the events leading up to a situation, and how to best deal with a situation), Limited Mind Manipulation, Can manipulate the battle song[3]), Durability Negation (Via manipulating the laws of space), Soul Absorption (Everyone with the system can absorb souls in order to make their own soul bigger and heavier and thus level up[4][5][6]), Power Bestowal (Sages can bestow gifts unto others and also grant immunity towards gifts[1]), Death Manipulation, Life Manipulation (Sages have control over the life and death of those with the systems[7][8]), Summoning (Can summon others from different worlds[1]), Fear Manipulation (The system decreases fear towards death[7][9]) and Morality Manipulation (The system numbs aversion to manslaughter. The system diverts summons thoughts from their homes[9]) , Forcefield Creation (Can erect barriers with multiple effects such as only letting certain people/things trough), Self-Sustenance (Type 2[8]), Resistance Negation (Can lower the resistance one has to an ability to zero[2]), Extrasensory Perception (Sages locate and mentally picture the location of those with the system[8]), Higher-Dimensional Manipulation (Worldview Holders can affect a Heavenly Record which is the conceptual base of a world for the observers to alter.), Conceptual Manipulation (Type 1; Worldview holders alter the heavenly record which is the conceptual base of the world for the observers to alter.), Accelerated Development (Leveling), Automatic Translation (via gift[10]), Information Analysis (Everyone can read their own status; they could see information on others like level and class name), Resistance towards: Pain Manipulation (Sages cannot feel pain[11]), Law Manipulation, Spatial Manipulation (Sages overwrite abnormal laws of space in order to make them fit for their existence), Fear Manipulation (Those with the system get their fear suppressed by the system[7][9]) and Soul Manipulation (When people with the system absorbs the souls of others, they increases the power, density, size and magnitude of their own[4][5]), Death Manipulation (Everyone with the system can resist the effects of instant death magic as long as they are stronger than the user[12]) and Soul Manipulation (When people with the system absorbs the souls of others, they increases the power, density, size and magnitude of their own[13][14]), Mind Manipulation (Mental resistance since Omega Sword can't read Sages' mind[15] Sage Alice's[16]. Should have superior mental resistance to Sage attendants like Ryouta who had High-level resistance to citywide mind control[17])

Speed: Relativistic+ (Should scale to other Sages and Sword Saints like Rick; reacted to a light magic attack), Speed of Light attack speed through magic

Durability: Mountain level (Should be comparable to her own attacks; physically conditioned for battle)

Stamina: High (Maintained her mosaic of different spaces for several days even after having been affected by Yogiri’s madness manipulation)

Intelligence: She’s extremely knowledgeable and smart when it comes to the workings of fate, its relation with destiny, the workings of destiny as well. She’s skilled when it comes to exploiting her own abilities while at the same time knowing her limits and trying to work around them. She’s also good at predicting human reactions without even using her ability to see through Fate

Weaknesses: The “script” of the world cannot be read and understood simply like that due to there being several protagonists, chaotic matters like the scenarios that are moving simultaneously and the scenarios change their aspects complicatedly according to the situation, although Aoi can overcome this by focusing on a specific target. She can’t believe cannot be realized, although this can be as much of a weakness as it can be a strength. Her beliefs cannot be changed so easily

Balance of Power: Balance of Power is Aoi’s ability to change events as she believes having Power Nullification thanks to it. The main use of the ability being applied through the belief of a cruel world where only great efforts are rewarded. This achieves her belief of balance of power in the world where obtained abilities are not your own power and as such she does not allow them, causing them to disappear. Her beliefs also include what she doesn’t believe, and what she doesn’t believe in what cannot be realized, as such, her ability also causes most supernatural events to become impossible because they should not be realizable.

Meta Perspective: Aoi can “look down” at fate, described by herself as a meta-ability that allows her to peek at the entire “script” of the world simultaneously. This is not limited to seeing the future as the ability also allows her to look at the past to see the events that lead up to an event/learn about her opponent, and the present to see the current events taking place. As an extension of this ability, she’s also capable of seeing/sensing the Fate value of events and Destiny value of people and knows how to manipulate them. She’s not limited to seeing one linear flow of Fate, she’s capable of seeing all possible flows of Fate.

To Reject All, To Not Let Anyone Past Here: One of Aoi’s natural skills as a Sage, rewriting the laws that govern space. In Aoi’s case, she creates a richly colored mosaic that fills a forest sized area. The mosaic is created after space is cut disorderly and connected over again halfheartedly, each section in a state as if they were in a different universe; each section that should be a ‘fragment of the world’ is a state of constant change, being rewritten, combining, and splitting just like that. The laws of the world are specifically modified to reject anyone and anything who tries to get past the mosaic, including magical power as the errors created by trying to cross a space operating under completely different laws that keep changing, are too many for it to make it past a section or even maintain itself.