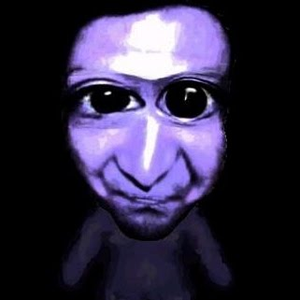 The Oni is a monster hunting a mansion, not far from a small Japanese town. Its origins are unknown, but there seems to be a large number of similar beings, possibly other infected.

Powers and Abilities: Superhuman Physical Characteristics, Teleportation, can transforms others into Ao Onis after killing them or eating them, can detect Heat, Breaking the Fourth Wall (It can hide behind the dialogue boxes and attack on the inventory)

Attack Potency: Wall level (Can easily kill humans, who can individually push a huge bookcase. Can break a hole in a wooden floor. Destroyed a small dresser in the anime)

Speed: At least Superhuman (Wrote all over a whole room in a few seconds and travels several meters in a fraction of a second)

Note: This profile covers all versions of the game, the movies, and other official sources