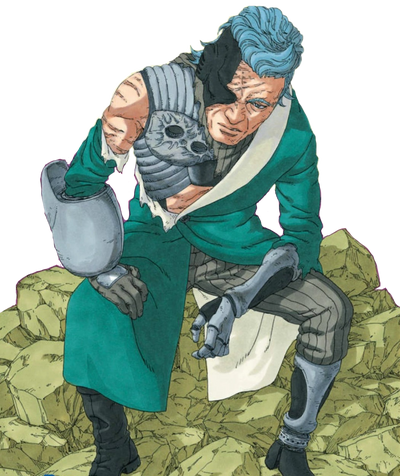 Ao (青, Ao) was a former Anbu of Kirigakure's Hunter-nin Corps, that served as the Fifth Mizukage's right hand. He was also the captain of the allied shinobi forces' sensory division.

After the fourth great ninja war he was presumed to have been killed by the Juubi's blast. In reality he survived, but had to be mechanically altered by Katasuke to keep him alive, after which he joined Kara.

All previous powers besides Enhanced Senses, Fire Projection (He can create fire projectiles with his chest piece, left hand, and his gatling gun), Energy Projection (With Mirror Drones), Power Absorption (He can absorb ninjutsu with Katasuke's jutsu absorption arm)

Attack Potency: At least Small Town level+ (As the bodyguard of the Mizukage, he should be superior to other Jonin) | At least Small Town level+ (Could easily hurt Boruto with his strikes despite not being in prime shape), higher with Scientific ninja weaponry (His weaponry is equal to the energy sword Boruto used to oneshot him, and he was able to damage Konohamaru twice)

Stamina: High (Can fight multiple ninjas without fatigue, superior to most Elite Jonin)

Intelligence: Above Average (Used to be the captain of the allied shinobi forces' sensory divison) 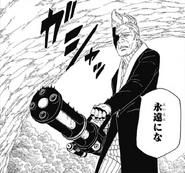 His mechanic arm turns into a gun. 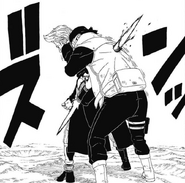 Deploying his drones.
Add a photo to this gallery

Retrieved from "https://vsbattles.fandom.com/wiki/Ao_(Naruto)?oldid=5606731"
Community content is available under CC-BY-SA unless otherwise noted.