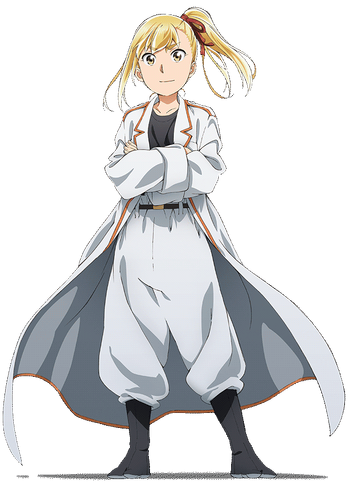 Anzu is an esper sent to kill Hina. After failing her mission, she attempted to return home only to discover her transportation device was damaged. Stranded, Anzu's homeless life began and continued until a doting couple adopted her.

Age: Unknown. (Presumably in her pre-teens)

Attack Potency: Small Building level (Is completely inferior to Hina, Prevented herself from being crushed from a small portion of the rubble of a collapsing building)

Stamina: High (Pulled Hina and a couple of televisions several blocks before tiring)

Intelligence: Average. Doesn't use her abilities to the best of their potential and likely never had a proper education as a normal girl while being raised by the organization, but later has proven to be a very capable young lady after being toughened in the homeless lifestyle, capable of surviving with little adult interaction and routinely helps her foster parents with their restaurant, and three years later working independently as a street food vendor.

Weaknesses: Her immaturity makes her vulnerable to manipulation. Doesn't use her abilities to their fullest potential.

Retrieved from "https://vsbattles.fandom.com/wiki/Anzu_(Hinamatsuri)?oldid=5053778"
Community content is available under CC-BY-SA unless otherwise noted.