VS Battles Wiki
Register
Don't have an account?
Sign In
Advertisement
in: Characters, Male Characters, Gods,
and 68 more 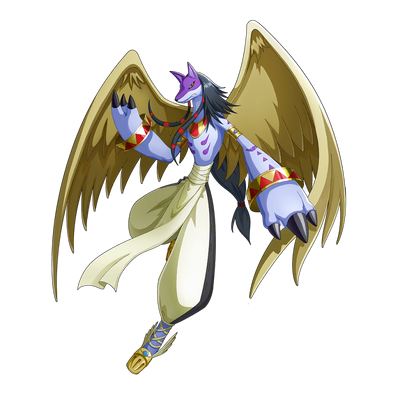 Anubismon is a God Man Digimon that guards and supervises the Dark Area. It constantly surveys the Dark Area, to which Digimon that were deleted when their life span finished, or when they were defeated in battle, are ultimately transmitted (and are transmitted there despite Fallen Angel Digimon and their like inhabiting it). As for the Digimon transferred to the Dark Area, if their data is evil, it imprisons them within eternal darkness, but if their data is good, it has the ability to reset them back to a Digitama. It has power as mighty as to decide the rebirth of a Digimon, and furthermore, it has the role of the Digital World's judge.

Superhuman Physical Characteristics, Digimon Physiology, Holy Power, Darkside Power, Light Manipulation, Holy Manipulation, Darkness Manipulation, Summoning, Flight, Sealing, Resurrection (Can bring beings back from non-existence), Existence Erasure via Delete (As a Virus Busters Digimon, Anubismon should have the ability to use "Delete", i.e erasing a being from existence and sending to the Dark Area, the graveyard of deleted data or to remove evil from within a being), Morality Manipulation (Can purify evil and make evil beings become good entities), Hellfire Manipulation and Conceptual Erasure with Hellfire (Type 2. The Flames of Hell/Dark Area aka El Evangelo are purifying flames that erase those who are burnt by them. This goes so far as to being able to erase even the Seven Great Demon Lords and erase one beyond death in which in Digimon death means nothingness. Whether the flames erase one beyond nothingness is dependent on whether they are evil or not. If evil, the one who is erased will be erased beyond nothingness), Can seal his opponent's abilities, Offensive Information Manipulation and Durability Negation via Schwarz Strahl, Dimensional BFR (Can banish foes to the Dark Area where they are erased and absorbed by Lucemon), Resistance to Existence Erasure and Time Manipulation.

Attack Potency: Planet level (Should be at least comparable to Ebemon who is capable of destroying entire planets) | Complex Multiverse level (Fought Sleipmon on even grounds)

Range: Interdimensional (Can travel from the Digital World and the Dark Area, can also summon Ammit from hell)

Intelligence: Varies among the species | Genius level (Implied to know all the happenings of the Dark Area and can judge a Digimon as soon as it dies)