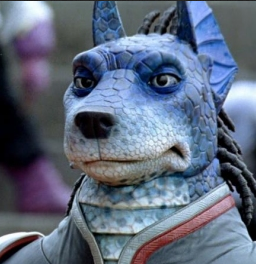 Anubis "Doggie" Cruger is the leading commander of Earth Branch's Space Patrol Delta, a dog-like alien race called Sirian, and the S.P.D Shadow Ranger. Before residing on Earth, he lives on a planet named Sirius, which was was attacked by Emperor Grumm and his forces. Despite fighting against the army and even cutting off one of Grumm's horns, the battle was lost with the Sirian race being killed and Sirius being destroyed. While he tends to act stubborn and serious, he is actually courageous, considerate, and indulgent. He was eventually promoted to Supreme Commander of Space Patrol Delta.

Attack Potency: Large Island level+ (He should be on par with other unmorphed Rangers), possibly higher (Fought Grumm unmorphed twice, defeating him the second time, though he was already weakened beforehand) | At least Large Planet level, possibly far higher (He should be comparable to the SPD Rangers S.W.A.T. Forms, which handily defeated an alien named Bork, who "Left Alpha Centauri in ruins" and "Has no problem with destroying Earth." Stood toe-to-toe with Grumm, who should not be inferior to Bork.)

Standard Equipment: He morphs using the Patrol Morpher, which is used to judging the suspect and containing criminal in anti-matter fusion cards called Containment Cards. The Shadow Saber is his signature weapon and it's also capable of imprisoning criminals in containment cards. He rides the Delta ATV, which is equipped with powerful blasters.

Intelligence: High. He is the head of Earth's SPD unit, often giving tactical instructions and orders whenever danger ensues. He was eventually promoted to Supreme Commander.

Weaknesses: Demorphs after taking a significant amount of damage, can be too stubborn to a fault.