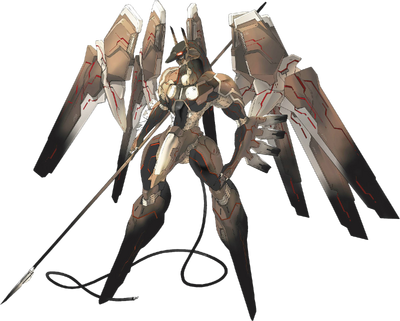 Anubis (アヌビス) was one of the most powerful Type C Orbital Frames featured throughout the Zone of the Enders series. It is Nohman's trademark Orbital Frame and was designed by his father, Rikoah Hardiman. True to its name, Anubis has a dog-like anthropomorphic appearance and its physical appearance is very similar to that of Jehuty, but with some key differences: its legs are reverse-jointed, with a set of six wings and most notably, a long prehensile tail. It is revealed in Dolores, that the "wings" on its back are actually huge vector traps.

Anubis is the strongest Orbital Frame, controlled by Nohman. A twin mech developed along with Jehuty, it has similar characteristics. It can use an Urenbeck Catapult to propel itself at incredible speeds. Anubis's abilities are similar to Jehuty's through the use of burst attacks and dash attacks. Anubis is already programmed with Zero Shift at the end of Zone of the Enders and is thus renowned as the most powerful orbital frame in existence.

Origin: Zone of the Enders

Attack Potency: At least Town level (Casually can destroy several buildings with his usual attacks and able to destroy the entire space colony with his energy projections), At most Island level via Self-destruction (Equal to Jehuty, who able to produce 22,3 gigatons energy) | Likely City level (A single attack can produce so much energy that it can casually destroy objects the size of an entire space colony with ease), Possibly Solar System level with "Project Aumaan" (After Anubis connected to Aumaan, he's able to destroy the entire solar system)

Speed: At least Relativistic (Anubis able to compress space and using his reactive force to accelerate itself up to sub-light speed) | Likely Relativistic+ (Must be equal to Jehuty, who can compress space, even in compressed space, also can outspeed full disintegration of Phobos and speed up himself even more, limited only by the endurance of his own pilot)

Durability: Likely Town level (Must be comparable to the power his own attacks) | Likely City level (Must be equal to Jehuty, who able easy withstood full activation of Project Aumaan with minor damage in the process)

Stamina: Limitless (Works on the anti-proton reactor and powered by Metatron, who is recovering endlessly)

Range: Tens of meters to his standard weapons, tens of kilometers with Self-destruction | Same as before, along with Interplanetary range with full activation of Project Auuman

Note: Only Anubis and Jehuty can connect to Project Aumaan through the transition to Zero Shift, also Zero Shift users can only be damaged by their counterparts, which makes them absolutely invincible in normal fight.