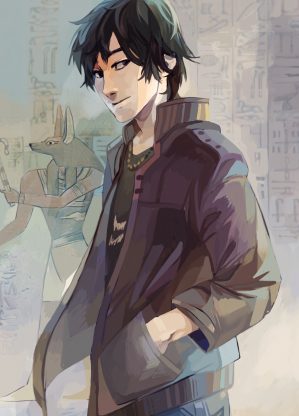 Anubis is the Egyptian god of death and funerals, despite being a son of Set and Nephthys, he was raised by Isis and Osiris in the underworld, taking the responsibility for guarding the underworld and bringing mortal souls for judgment. After meeting Sadie Kane, Anubis started to have feelings for her, because of this. He and Walt Stone, a person who also has the same feelings towards Sadie, decided to become one, and with Ra's permission, Anubis is the only Egyptian god allowed to have a mortal life on earth.

Speed: At least High Hypersonic+ (Far superior than any magician when serious)

Stamina: Godly (As a god, he rarely suffers from physical exhaustion and will never succumb to the effects of illness or aging.)

Standard Equipment: The feather of truth

Intelligence: High (Immortal being with thousands of years worth of knowledge and is able to keep track of all souls in the underworld)

Weaknesses: Can be banished deep into the Duat through death or very powerful and effective magical items, Needs a host to appear in the mortal world for any significant length of time, Can be destroyed if a magician casts an execration spell on their sheut

Retrieved from "https://vsbattles.fandom.com/wiki/Anubis_(Riordan)?oldid=3386719"
Community content is available under CC-BY-SA unless otherwise noted.