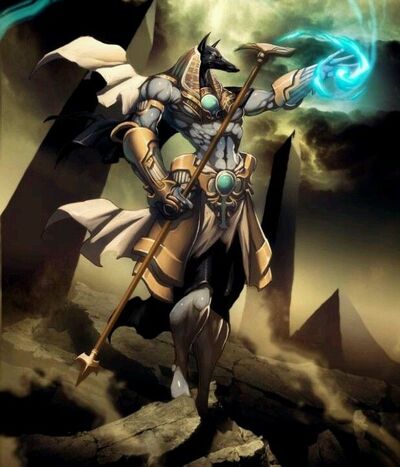 Anubis is the Egyptian god of death and mummification with the head of a canine who supervises the flow of souls into the afterlife. An embalmer, protector of graves and the original lord of the underworld until being replaced by Osiris, he would weigh the hearts of the recently deceased compared to a feather on a scale to judge them. Hearts lighter than the feather would be allowed to ascend onward into the realm of the dead, while hearts heavier than the feather would have their souls devoured by Ammit.

Name: Anubis, Anoup, jnpw, "lord of the sacred land", "he who is upon the mountain" (among various other titles)

Attack Potency: Universe level+ (Defeated Set when he tried to attack Osiris' body, branding him with a metal iron and even being able to flay his skin off)

Range: Low multiversal (could transport souls from the living realm to the afterlife/Duat)

Intelligence: The judge of the dead who is able to oversee all passing souls, deciding their worth of entering the afterlife