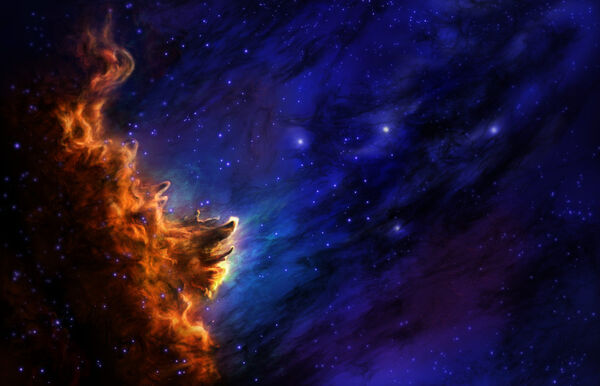 Anu is the unconscious and featureless Concept of Stasis, and the mirror-opposite of Padomay, the disembodied Concept of Change. It is the quintessencial force of order and stability, with all possibility, shape and definition being born from its interplay with Padomay, which acts as the primordial chaotic force. Anu is a wholly impersonal idea, devoid of all consciousness and cognition, and thus incapable of perceiving itself and reality around it. Therefore, so that Anu might know itself, it unconsciously birthed its own subgradient, the ineffable Light of Anui-El, the primordial Embodiment of Existence, Anu's own conscious "soul" and the Soul of All Things.

In truth, however, Anu is more than just the disembodied Concept of Stasis, but rather something of far greater significance to all existence. The abstract representation of Stasis called Anu is in fact merely a fleeting echo of the infinite unconscious mind that Dreams all things into being, the Godhead known simply as ANU. Their distinction is told through metaphor in The Annotated Anuad, a children's religious text which explains the creation of the world in a simplified manner.

The Anuad tells us that originally there were two brothers, Anu and Padomay, who existed alone in a featureless, timeless Void. Through their interplay of Light (IS) and Darkness (IS-NOT) a third being is created, Nir (The Grey Maybe), the feminine creative principle and the origin of all possibility. Anu and Nir fall in love with each other, and she becomes pregnant with his seed. However, Padomay also loved Nir, and enraged with her rejection, murders her as she was giving birth to Anu's children. Anu then strikes back at his brother, and murders him in turn. Finally, Anu is left alone, with a broken mind and a grieving heart, and so he hides himself in the Sun, and begins to Dream.

However, the story of the Anuad is both heavily symbolical and extremely simplified, and in no way meant to be taken literally. Whether Anu, Padomay and Nir were actual living beings or merely illustrative metaphors is unknown, and ultimately irrelevant. What is known is that the betrayal of Padomay and the murder of Nir filled Anu with such grief that, descending into a state of cosmic sensory deprivation, he fell into eternal sleep. Through this act, ANU flowered into Amaranth, becoming the Godhead that Dreams the World, anon ANEW AE I.

ANU's Dream is one of mourning, with Nir's Primal Wail - her mutual crying of simultaneous childbirth and death - echoing through every level of existence as a Song, resulting in an endlessly echoing pattern of betrayal, death, and suffering. Within its own Dream, ANU is represented as Anu, the featureless Concept of Stasis, with its brother Padomay representing the opposing Concept of Change. Nir herself is represented as the resulting Grey Maybe between, the Aurbis, literally meaning "Arena" in Ehlnofex, a perfect representation of the love both brothers shared, and killed each other for.

Titles: Anu the Everything, The All-Maker, The Source, The Soul of All Things, The Everlasting Ineffable Light | God, The Uncaring Godhead, The Eternal I, ANEW AE I, The First Serpent, The Snake Who Came Before, The Great Root, The One Who Dreamt Anew

Classification: Primordial Concept of Stasis, The Everlasting Ineffable Light, The Soul of All Things, Mirror-Brother of Padomay, Father of Aka | God, Amaranth

Attack Potency: High Outerverse level (Anui-El is the everlasting, ineffable Light of Existence which encompasses, surrounds and exists beyond the Aurbis and the endless realms of unstructured chaos that stand above it, and which sparked its creation through its interplay with the infinite, inexpressible Void of Sithis, being the "IS" opposite to Sithis' "IS-NOT", and thus one of the two pillars which define all reality and its opposing forces. Infinitely and incomprehensibly vast even to the Boundless and Eternal Et'Ada, all of whom were birthed from its interplay with Sithis, sparkling into being as a mere side-effect of their interaction. Birthed Aka from its own infinite light to act as its "soul".) | High Outerverse level (Anu is the boundless, featureless, unconscious and impersonal Concept of Stasis, standing completely transcendent over even the IS/IS-NOT interplay of Anui-El and Sithis, with the former being merely a small aspect of Anu, formed so that it might acquire self-awareness. Is the mirror-opposite of Padomay, the primordial Concept of Change, with both fundamental ideas being what define the entire Dream of the Godhead at its most primal level.) | Boundless (Having flowered into the statehood of Amaranth, and thus rising beyond CHIM and beyond all "AE", ANU became the unerased and all-encompassing Godhead, the Eternal I that is completely unbound by all illusions of duality and restriction, and which stands simultaneously above the highest gradient and below the lowest subgradient of existence, free of all things but its own infinite consciousness, and able to Dream all ideas and possibilities into being)

Intelligence: At least Nigh-Omniscient | Inapplicable. Anu is fully impersonal and has no true consciousness or sentience, being merely the formless, primal concept of Stasis whose interaction with Change formed the Aurbis. | Inapplicable.