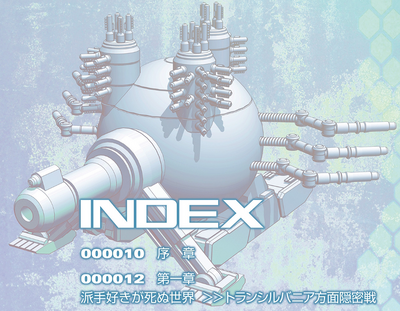 Antoinette, also known by its Legitimacy Kingdom codename Over Cavitation, was a 2nd Generation Capitalist Corporations Object operating in the Hawaii District.

Tier: 7-B with main weapon, 8-B with secondary weapons

Range: Over 20km with secondary weapons, at least 10km with its main weapon

Cavitation Water Cannon: The Antoinette's main cannon fires a water spear and then sends a supersonic wave through that to raise the sound pressure and transform it into a bunch of air bubbles, using cavitation to tear through enemy armor with a 10km long white spear.

Bipod: The legs of the bipod on the Antoinette's main cannon can extend and be used to kick at the water's surface with an air cushion to "hop" to one side as a sudden evasive action.

Steam Engine Antoinette has several metal pipes spread out on either side like wings that suck up the seawater and convert it to vapor with the immense heat produced by its reactor. That steam power is then used to slide the 200,000-ton mass side to side, increasing its mobility.

Retrieved from "https://vsbattles.fandom.com/wiki/Antoinette_(Heavy_Object)?oldid=5294204"
Community content is available under CC-BY-SA unless otherwise noted.