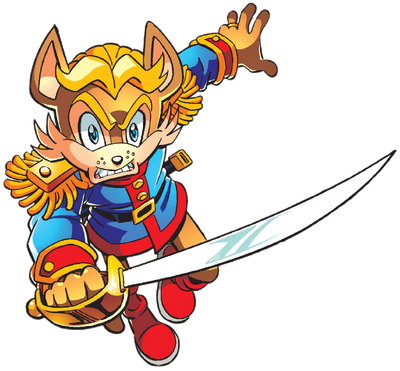 Antoine D'Coolette (born 3217) is one of the main characters in the Sonic the Hedgehog comic series and its spin-offs published by Archie Comics. He was a mobian coyote and the son of the late army General Armand D'Coolette and Marie D'Coolette. He was as well a faithful and longtime member of the Knothole Freedom Fighters and husband of his teammate Bunnie D'Coolette. Outwardly brave and noble yet serious about his duties, Antoine fought alongside his fellow Freedom Fighters against the evil forces of Dr. Eggman and the Eggman Empire.

Attack Potency: Universe level+ (Matched Patch D'Coolette, who could hold his own against Sonic in hand-to-hand combat. Has fought with Monkey Khan, Geoffrey St. John, Egg Beater, and the Iron King)

Intelligence: In the beginning, Antoine was a clumsy and unskilled Freedom Fighter in combat due to his cowardly nature. As time went on though, he developed adept fighting skills and a degree of tactical wit which have continuously improved over time. As a great practitioner of swordsmanship he excels with the use of his personal saber, and can also utilize other weapons when needed. Antoine is also skilled in hand-to-hand combat, has some formal military training from his father, and has received additional training from Bunnie Rabbot. He is known to favor tactical analysis in battle, as showcased when he fought only to disarm his opponent when battling Sonic on Moebius, believing that if "Evil" Sonic died he would be trapped there. His abilities in the field earned him the rank of commander in the Royal Army despite having originally been just a civilian wearing his father's old uniform. Antoine is also bilingual and is a seasoned pilot.

Weaknesses: Was initially prone to cowardice, but this has been (mostly) resolved

Retrieved from "https://vsbattles.fandom.com/wiki/Antoine_D%27Coolette_(Archie_Pre-Genesis_Wave)?oldid=5497277"
Community content is available under CC-BY-SA unless otherwise noted.