VS Battles Wiki
Register
Don't have an account?
Sign In
Advertisement
in: Gunnerkrigg Court, Characters, Female Characters,
and 15 more 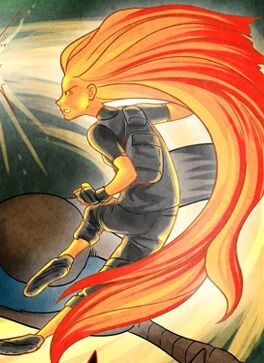 Antimony "Annie" Carver is the protagonist and primary narrator for the Webcomic Gunnerkrigg Court and a student at the Court of the same name. She also functions as the Medium between the Gillitie Wood and The Court.

Tier: Likely 10-A physically, possibly 9-A with Fire Manipulation

Powers and Abilities: Etheric Manipulation (The Ether is a non-physical realm that overlaps the physical one and is the source of all Annie's abilities), Fire Manipulation (She has complete control overthe fire she creates), Astral Projection (She can extend her consciousness into the Ether to view her surroundings), Light Manipulation (Created a blinding flash of light), Limited Telekinesis (Can only move small objects), Summoning (Has a beacon that can summon James Eglamore), Statistics Amplification (She can buff others with fire), Her touch can dispel Illusions, Can guide ghosts into the afterlife, Can possibly harm intangible beings and see through Invisibility via the Ether

Stamina: She's athletic and spends a lot of time in Gilitie Wood

Intelligence: Very clever and resourceful, but had to cheat off her friend Kat to get good grades in class. She is fluent in Polish and Spanish and apparently learned some Ancient Egyptian from a Psychopomp

Weaknesses: Without her Etheric abilities, she's just a normal, if athletic human girl. She has no formal combat training. Cannot manipulate natural fire