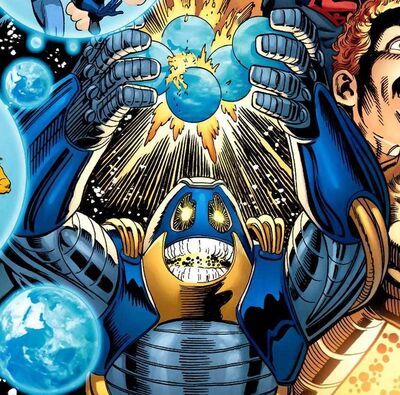 Antimatter is the mirror image of matter, and consists of antiparticles that have the opposite charge and spin to their more prevalent counterparts.

Once equivalent ratios of matter and antimatter particles react, they are almost immediately converted into energy in a process referred to as "annihilation".

It is theorized that during the Big Bang, equal proportions of matter and antimatter were formed.

Based on this theory, the physical aspects of the Universe should not exist as it does today. However, due to reasons unknown, there currently exists more matter than antimatter.

Once thought to be a theoretical concept, antimatter can actually be found on Earth in the form of cosmic rays jettisoned from the depths of space. In reality, antimatter can be produced in nature by the decay of certain Potassium isotopes or by lightning in the midst of thunderstorms.

Mankind is researching the properties of this substance to harness its power, even succeeding in creating minute antimatter particles with the employment of the greatest of technology in scientific facilities. These facilities include Fermilab’s Tevatron particle accelerator which produced up to 15 nanograms of antimatter, CERN which created to about 1 nanogram of antimatter, and DESY in Germany which manufactured approximately 2 nanograms of positrons to date. Due to the fact that mankind does not currently have the resources to create enough antimatter for proper use, many of its potential applications have strictly been explored in fiction.

The concept of antimatter and its properties are deeply rooted into fiction due to its destructive power and the mystery of its origins.

In many fictitious tales, antimatter is weaponized by mankind, as portrayed in the novel "Angels and Demons", in which an antimatter bomb was built.

This is especially effective considering that even a single gram of antimatter reacting with a gram of ordinary matter would result in a 43 kilotons release of energy, which would easily destroy a town (approximately 3 times the potency of the bomb dropped on Hiroshima). However, roughly half of the energy would escape as non interacting neutrinos for a theoretical antimatter bomb.

One of its many uses in fiction includes serving as fuel for ships capable of interstellar travel, as depicted in the Star Trek franchise.

It can also be used to empower human beings such as the Blue Marvel and Positron from the City of heroes giving them great control over antimatter.

Alternatively, it can be conceptually embodied by deities, such as the DC character the Anti-Monitor, some of which may sometimes even be used to explain, why there is no significant amount of antimatter in the mainstream Universe within their respective franchise. This is symbolized by Pokémon's Giratina, for example.

Sometimes normal characters, consisting of ordinary matter, can interact with antimatter objects and realms with no physical repercussions. This is usually just plot induced stupidity to ensure proper flow of control in regards to the story.