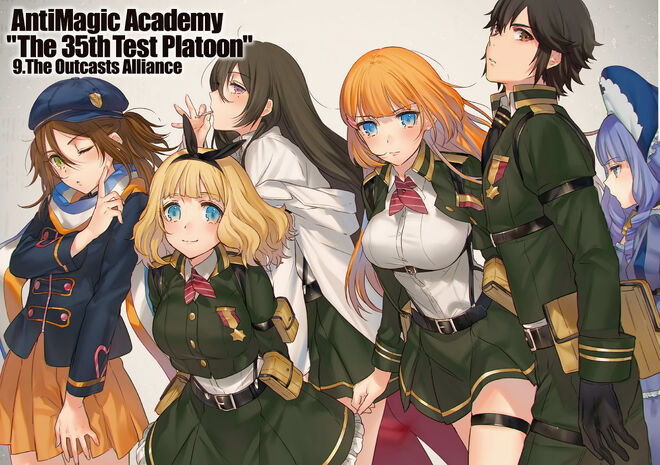 AntiMagic Academy is a light novel series written by Yanagami Touki and illustrated by Kippu.

It has been 150 years since the Witch Hunt War, where humans fought witches, sorcerers and magical beings like dragons and elves for survival in a world war that almost wiped out humanity and left significant portions of the planet uninhabitable. Just like magic displaced swords, the development of guns and other advanced weapons and the gradual waning of magic power has lead to the rule of the Inquisition, a human organization that hunts evil witches and dangerous magic items to protect mankind. The story follows the 35th Test Platoon, one of the student teams in the Inquisition's AntiMagic Academy. Nicknamed the Small Fry Platoon due to their lack of achievements, the 35th Platoon is made out of oddballs and weirdos, like Takeru Kusanagi, a swordsmanship-obsessed boy with temper issues; Ikaruga Suzunami, a perverted weapons designer; and Usagi Saionji, a sniper with confidence issues. Threatened with repeating a grade, the 35th Platoon is suddenly reinforced by Ouka Ootori, the adopted daughter of the Academy's Chairman and a prodigy that has been demoted back to the Academy due to insubordination and her overzealous nature in punishing criminals and witches.

The fighters of the verse mostly range from Street level to Building level, though a few characters have special attacks comparable to weak nuclear weapons in the Town level. In terms of Speed, most of the stronger characters are in the Supersonic combat speed range, though two characters can go much faster using special techniques (up to Massively Hypersonic speeds, with even faster attack speeds for some special techniques). As the name of the verse indicates, several characters have diverse ways to nullify or weaken magic. There are some characters with powerful forms of immortality and/or regeneration and various types of hax like Absorption, Durability Negation, BFR, Soul Destruction, etc.