VS Battles Wiki
Register
Don't have an account?
Sign In
Advertisement
in: Characters, Arrowverse (CW), Male Characters,
and 36 more 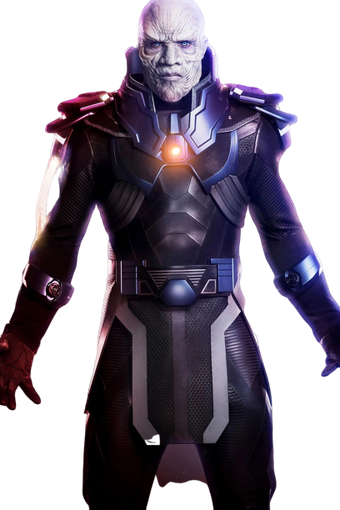 The Anti-Monitor is a cosmic being of supreme power and malevolence that desires the annihilation of the multiverse and all life in it by any means necessary. He is opposed by his benevolent mirror counterpart, Mar Novu, known as the Monitor.

Tier: At least High 4-C normally, Low 2-C when empowered by the Crisis, 2-A with the Antimatter Cannon

Age: Existed since the dawn of time

Powers and Abilities: Superhuman Physical Characteristics, Immortality (Type 1), Regeneration (High, was able to regenerate himself after being obliterated by the Spectre), Reality Warping, Antimatter Manipulation (Is made of antimatter and can generate waves of antimatter that can erase entire universes from existence), Energy Manipulation and Projection, Forcefield Creation (Easily blocked the collective assault of the heroes with a barrier of energy), Existence Erasure (Can erase beings and entire universes from existence with antimatter), Telepathy (Was able to communicate with Nash Wells while still imprisoned in the Monitor's realm. Later communicated with Harbinger the same way), Telekinesis (Was able to effortlessly pull Nash Wells inside the portal to his realm without even being physically present), Gravity Manipulation (Increased gravity to the point that even Kryptonians couldn't move while possessing Harbinger), Possession (Took possession of Harbinger's body), Absorption (Absorbed Novu's essence into Harbinger's body after having taken possession of her body), Summoning (Can summon Shadow Demons to attack universes. Forcibly summoned Harbinger), Empowerment (Grows stronger each time he destroys universes and as the Monitor grows weaker), Power Bestowal (Turned Nash into Pariah and gave him cosmic powers), Flight, Size Manipulation, Large Size (Type 2), Self-Sustenance (Type 1, 2 and 3), Teleportation, Dimensional Travel, Master Manipulator

Attack Potency: At least Large Star level normally (Stated to be far stronger than the Monitor. Able to make stars go supernova), Universe level+ when empowered by the Crisis (Was able to single-handily destroy Earth-1), Multiverse level+ with the Antimatter Cannon (Destroyed the multiverse, which contains an infinite number of universes and timelines)

Speed: FTL (Is capable of keeping up with all the Paragons at once, including the likes of Supergirl and Flash, and can easily react to their attacks and counter them although he was slower as a giant)

Lifting Strength: At least Class G (Should be at the very least comparable to the likes of Supergirl and Superman and likely above them)

Durability: At least Large Star level normally (Should be above the likes of Novu), Universe level+ when empowered by the Crisis (Was barely fazed by the combined assault of the Paragons and heroes during their final fight against him. It required to be amplified by the combined power of all the Paragons at the same time for The Spectre to obliterate him and it also caused his death)

Range: Standard melee range, Dozens of meters via Energy Projection and later via Size Manipulation, Multiversal+ via the Antimatter Cannon

Intelligence: Extraordinary Genius. The Anti-Monitor is an immensely intelligent being and an excellent strategist and manipulator, having been able to use Nash Wells to release himself and successfully manipulated the heroes to accomplish his goal to destroy the Multiverse, outsmarted the likes of Novu, who is himself an extremely skilled tactician, and Lex Luthor who is one of the most intelligent people in the Multiverse.

Weaknesses: Cannot reach the Vanishing Point as it exists outside of time and space. As the Monitor grows stronger, the Anti-Monitor grows weaker.