VS Battles Wiki
Register
Don't have an account?
Sign In
Advertisement
in: Tier 2, Tier 2-C, Tier 2-A,
and 45 more 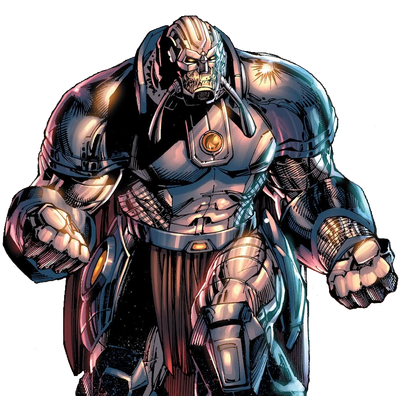 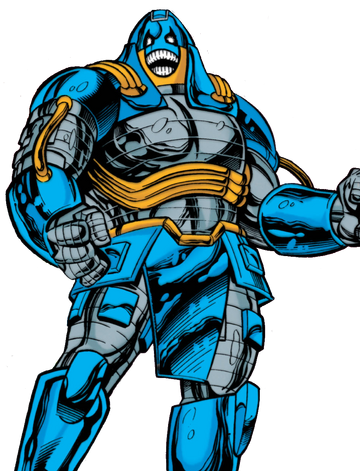 The Anti-Monitor, real name Mobius, is one of the three sons of Perpetua, created when she tore pieces from the Overvoid to shape into her children. He existed before the first version of the DC Multiverse was finished being created, and was made in order to guard the boundaries of Creation from the greater Omniverse beyond, a duty that was later fulfilled by the Source Wall. This usurpation was knowingly set in motion by his brother, the Monitor, leading to their long-lasting war.

Mobius returned in the second version of the DC Multiverse, reborn on Qward (or its moon), where he built the Mobius Chair in order to study the secrets of the multiverse. He discovered the Anti-Life Equation at the center of the antimatter universe, becoming bound to it, leaving the Mobius Chair to come into the possession of the Pre-Flashpoint emanation of Metron. Mobius enslaved the antimatter universe as his empire and created the Thunderers of Qward, turning the most elite among them into his Shadow Demons. He entered into a million-year conflict with Mar Novu which ended when both were knocked into comas.

Much later, after he was awakened by the actions of Pariah, Mobius initiated the Crisis on Infinite Earths. He would later be defeated by the actions of the Spectre and Earth's heroes, later returning alongside the 52 Multiverse. He joined the Sinestro Corps as their Guardian while not fully reborn, and after being defeated his near-dead body was enslaved by Nekron as the power source for the Black Lantern Corps. He was revived by the Life Entity and, after the Flashpoint event, instigated a conflict with Darkseid in order to rid himself of the Anti-Life Equation. He succeeded but was destroyed by it due to the actions of Grail, and after returning again to the Sixth Dimension, his current whereabouts are unknown.

Age: Exists completely beyond time, 20 billion years from the perspective of the multiverse

Classification: God of Antimatter, The Anti-God, Son of Perpetua

Superhuman Physical Characteristics, Genius Intelligence, Acausality (Type 1. Unaffected by the Crisis and the Flashpoint), Flight, Self-Sustenance (Types 1, 2 and 3), Immortality (Types 1 and 4), Antimatter Manipulation (Can release blasts and waves of antimatter), Existence Erasure and Durability Negation (His antimatter absorbs any energy sent at it and eliminates what it touches from all existence), Extrasensory Perception (Can sense life force), Soul Manipulation (Can shoot blasts of antimatter flame that torch the soul), Vibration Manipulation, Breath Attack, BFR, and Age Manipulation (Can send victims back through time, devolving them), Energy Absorption and Empowerment (Can absorb antimatter energy from his entire universe to gain power), Life Force Absorption (Can absorb life force to gain tremendous power), Law Manipulation (Wields the Dimensional Superstructure, which governs all things imaginable and unimaginable), Matter Manipulation (Can transform positive matter into antimatter), Energy Manipulation (Can convert antimatter into energy which he can control; can make energy bindings), Forcefield Creation (Held the Guardians in a stasis beam and trapped earth), Biological Manipulation (Removed Psycho Pirate's face), Transmutation (Can transform beings into Shadow Demons which can take many powerful attacks but vary in power), Darkness Manipulation (Can create Shadow Demons by stealing others' shadows), Summoning (Can summon enough Shadow Demons to cover the earth; Can summon other beings via teleport beam), Incorporeality (Exists as an energy being under his armor), Non-Physical Interaction (Split Firestorm apart), Portal Creation and Dimensional Travel (Sucked earth into the antimatter universe), Limited Magic Nullification (Magic is nullified within the antimatter universe, shown when Deadman couldn't possess the Anti-Monitor), Power Bestowal (Bestowed some of his power on his Qwardians), Power Modification (Can improve the abilities of others), Animation (Animated stone golems), Earth Manipulation (Caused a rock to fall on Pariah), Air Manipulation (Altered Red Tornado into the elemental being he was meant to become), Time Travel (Traveled to the Dawn of Time), Limited Fusionism (Merged with his brothers), Telepathy (Contacted Harbinger across dimensions), Telekinesis (Drew the trapped Shadow Demons back to him), Astral Projection (Can project his face across the sky), Technology Manipulation (Manipulated the Central Power Battery to blast the Guardians and caused Mar Novu's satellite to malfunction), Enhanced Senses (Has sensed Perpetua launching a planet from Earth-44), Creation (Can create new worlds)

Mind Manipulation, Empathic Manipulation, Soul Manipulation, Flight, Deconstruction, Morality Manipulation, and Conceptual Manipulation (Type 1) (The ALE places victims under complete control and enslaves souls, a power Mobius used to control Barry Allen and the Black Racer, forcing them to bond and kill Darkseid), Necromancy (The ALE can be used to resurrect the dead) and all the powers of the Anti-Life Equation

Resistance to Energy Absorption (Resisted his energy being drained), Death Manipulation (Was injured by the Black Racer but didn't die), Mind Manipulation and all the powers of the Anti-Life Equation (Being bound to the Equation made Mobius immune to similar powers), extreme cold, and cosmic radiation, Antimatter Manipulation (He and his brothers can avoid being destroyed by antimatter)

Attack Potency: Low Multiverse level, possibly Multiverse level+ (Equal to The Monitor. Darkseid would not escape him after he's done with the infinite universes and could destroy Apokolips. Defeated Earth-1 Superman[1]), higher with Absorbing Energy. Multiverse level+ via Anti-Matter Wave (He caused an Anti-Matter wave that targeted all worlds in all times[2], intending on destroying the infinite universes.).[3] | Multiverse level+ with the Anti-Matter Universe Absorbed[2] (After stealing the heroes' life energies to replenish what he lost upon breaking through to the Dawn of Time, he would have become the hand of creation and made it so the positive matter multiverse never existed.[2] He battled[2] a heavily-amplified Spectre) | Solar System level (Far superior to normal Green Lanterns, and could fight against the Guardians of the Universe) | Universe level+ (The Anti-Life Equation gave Mobius power on a universal scale,[4] and Metron was concerned that he would destroy reality[5]) | Outerverse level (Portrayed as bigger than Creation and exists in the Sixth Dimension, the final realm and highest plane of existence. The Brothers Three wrote all the rules of the Multiverse)

Durability: Low Multiverse level, possibly Multiverse level+ (Fought his equal in power[1], Mar Novu, for one million years before falling. Withstood a beating from Pre-Crisis Supergirl), higher with Absorbing Energy (After absorbing an Anti-Matter Star, the combined forces of several Pre-Crisis heroes didn't do any damage to him) | Multiverse level+ with the Anti-Matter Universe Absorbed | Multi-Solar System level+ (Survived the explosion of Warworld and its Yellow Power Battery, which could destroy the Milky Way Galaxy, although he was severely wounded by it[6]) | Universe level+ | Outerverse level

Stamina: Infinite (Kept fighting the Monitor for one million years[1] until he was knocked unconscious)

Intelligence: Supergenius (Built a machine that reduced the vibrational differences between universes, attempting to merge timelines, as well as an antimatter cannon that was capable of piercing Mar Novu's netherverse and destroying the fortified universes within. Built the New 52 version of the Mobius Chair used by Metron of the New Gods, who is even more intelligent than Brainiac.)

Weaknesses: If his armor is sufficiently damaged, his energy may leak out | None notable 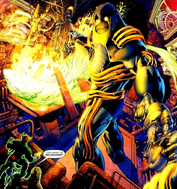 Guardian of the Sinestro Corps 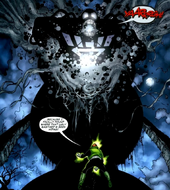 Revived by the White Light

Back to his original armor design after Flashpoint

Freed of the Anti-Life Equation

Mammoth Mogul (Archie Sonic Continuity) Mammoth Mogul's Profile (Base Mogul and New 52 Anti-Monitor with the Anti-Life Equation were used, and speed was equalized)