VS Battles Wiki
Register
Don't have an account?
Sign In
Advertisement
in: Characters, The Fairly Oddparents, Cartoon Characters,
and 25 more 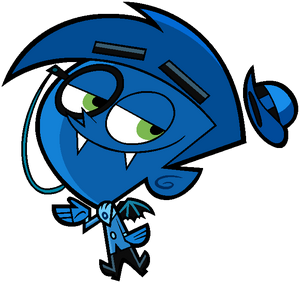 Anti-Cosmo is the Anti-Fairy variant of Timmy Turner's Fairy Cosmo. He is portrayed to be a complete opposite of his happy-go-lucky counterpart, being extremely intelligent.

Age: Over thousands of years old

Powers and Abilities: Superhuman Durability and Flight Speed, Reality Warping & Logic Manipulation via Magic (Comparable to regular fairies and Cosmo, shown having some of their powers and should have all of them), Non-Physical Interaction (With magic), Self-Sustenance (Types 1 & 2), Regeneration (Mid-High. Scaling from other fairies, who had their magic drained, thus being turned into dust, and were able to quickly come back to normal upon having their magic returned to them[1]. It's also stated that Fairies are notoriously fast healers, which is repeatedly shown), Immortality (Types 1, 2 & 3), Extrasensory Perception (Can smell bad luck. Scales to other Anti-Fairies who smelled bad luck on one place while flying around the world), True Flight & Spaceflight, Shapeshifting, Teleportation, Energy Projection, Bad Luck Manipulation (Threw salt at Jorgen's boot and on its own caused his laces to tie themselves[2]), Power Nullification (Great amounts of Anti-Fairies could interfere with and nullify Cosmo & Wanda's, and later Jorgen's, wands trying to affecting them), Toon Force, Has access to the same powers Timmy has due to Fairy Magic (Has only demonstrated using the ones listed earlier), Resistance to the powers Magic has in the verse (Timmy stated that "magic can't affect other magical items" when using Cosmo transformed into a magical shield to reflect a couple of transmutation beams from Crocker, later using Santa's magic bag to protect himself and Cosmo from Crocker warping the world and manipulating everyone's mind. Timmy had everything magic still working. Anti-Cosmo's should be able to create and transform into things with this resistance), Absorption (After getting physically stronger Cosmo was able to punch through Crocker's attempts to absorb him in his scepter, and was only affected when he got distracted. Anti-Cosmo should be able to do the same). Formerly Invisibility (Before Jimmy Timmy Power Hour 2: When Nerds Collide! there was a rule in Da Rules stating that Anti-Fairies were invisible on Earth, which Jorgen modified)

Attack Potency: Below Average Human level physically, Universe level via Magic/Reality Warping (Anti-Fairies are comparable to regular Fairies, such as Cosmo), able to ignore durability in many ways

Striking Strength: Unknown, up to Universal with Magic

Durability: Below Average Human level physically (Comparable to other fairies), Universe level with magic protection. Regeneration and self-healing makes him difficult to kill

Stamina: Extremely high. Should be comparable to other fairies like Binky, who withstood being spun on a wheel for a millennium by Jorgan[4]. Comparable to fellow Anti-Fairies, which could circle the world "at hypersonic speeds" over and over, stopping its rotation to maintain the same day and aiming to keep doing so forever[5], though Fairies have shown to be tired before over lesser things

Range: Standard melee range physically, Low Multiversal with magic (Fairy magic can reach the entire universe, other points in time and make things happen in other universes, although it can't travel to other universes with sheer speed or affect the space between them. Shirley, a being created from Cosmo & Wanda's magic, was able to create vacuums that were automatically expanding and were going to destroy the 2 universes in which they were after about 2 days, even with Shirley being in his own universe)

Intelligence: Gifted. Being Cosmo's opposite, Anti-Cosmo is extremely intelligent. However he lacks some form of common sense

Weaknesses: Extremely arrogant, can lack common sense. Can be weakened by good luck