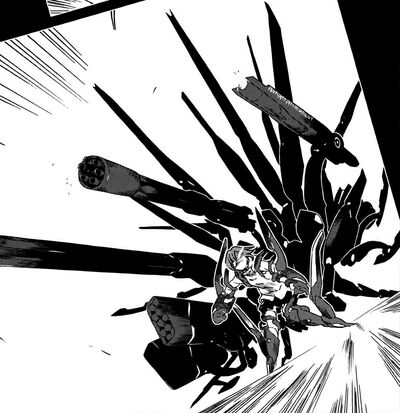 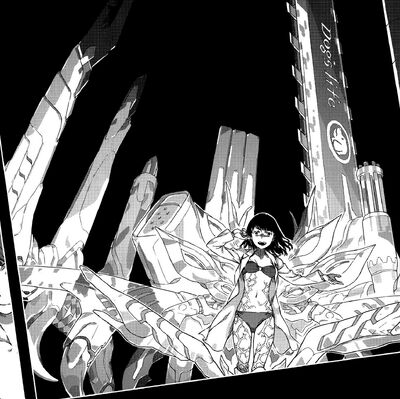 The Anti-Art Attachment (対魔術式駆動鎧 (アンチアートアタッチメント) Tai Majutsu-shiki Kudō Yoroi (Anchi Āto Atatchimento) lit. "Anti-Magic-Type Powered Suit") is a special powered suit developed by Academy City comprised of various parts and components which are assembled around and connected to its user. The Anti-Art Attachment's primary function is more an application of medical technology than military technology. A form of external cyborg attachment, it forms a link between the user and another individual, allowing the user to remotely draw on their power. The suits draws on the power of Aleister Crowley, but it requires the wielder to understand the world of magic beyond science to use its full potential.

The Anti-Art Attachment is the main weapon of Kihara Noukan, who keeps a hangar in each of the 23 Districts of Academy City filled with components, fuel, armor, weapons, and ammunition for the suit. Mikoto stumbled into one of these hangars during the fight against Kihara Yuiitsu, and she used the powered suit to defeat her in one attack. Mikoto would later build her own AAA, though she lacked the occult knowledge to fully replicate its black box. During her second fight with Touma and Kakeru, Yuuitsu would also make her custom version of the AAA without Aleister's support by sacrificing her own creation, Elements.

Tier: 9-A with containers, higher with actual weapons, 7-B with Tactical Armor-Piercing Drill | At least 9-A, 8-B to 8-A with large caliber railgun | At least 9-A

Durability: City level (Via this calc) | At least Building level (Mikoto blocked an attack from a Class 6 Element which only bent some of its weapon barrels) | At least Wall level (Made out of Element bodies)

Range: At least hundreds of meters with various ranged weapons

Weaknesses: The user needs knowledge of magic to wield the suit's full potential | Same | Vulnerable to Imagine Breaker, since it's made from Element bodies

AAA: The suit consists of a series of weapons, armor, supporting legs and boosters that attach to the user's body and respond to their mental commands. If necessary, the suit will shift its design to better match the user's body.

Retrieved from "https://vsbattles.fandom.com/wiki/Anti-Art_Attachment?oldid=4615130"
Community content is available under CC-BY-SA unless otherwise noted.