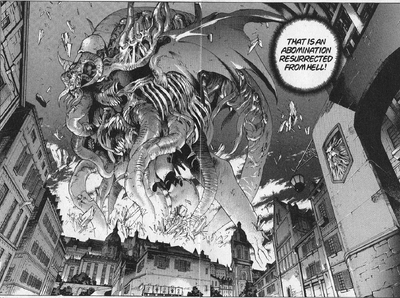 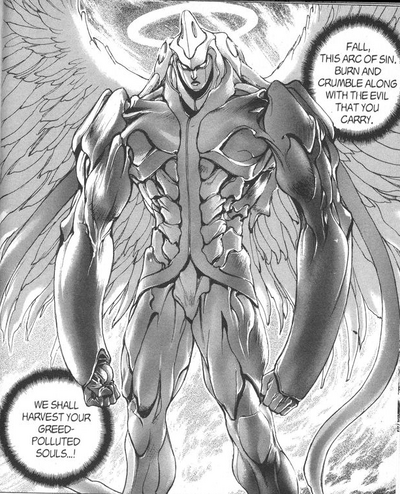 Anthrax (also known as Evil God Anthrax) is a female demon, with enormous destructive power. Other than that, little is known about Anthrax, though it is believed that she is a feared being, as just mentioning it's name, can create panic amongst people. Anthrax was created by scientists, magicians, and alchemists, hoping to put an end to all wars in the world.  She was the culmination of all their work, and the most powerful of the Demon Gods that had been created. With her demonic and destructive power she destroyed big cities thus deciding the outcome of the war. Anthrax then began acting under her own, free will, and by using her telepathy, she communicated with other demon gods and forced her will upon mankind. She declared war on humanity, and those that tried to stop her, were overwhelmed and left as corpses. On the verge of humanity's destruction, the Dragon Knight appeared before Anthrax to stop her. As they battled they were moving the entire planet earth's axis. After ten days of battle, one last attack from the Dragon Knight defeated her. The Dragon Knight then buried her deep down under the ground and trapped her with four seals. Anthrax is seen as a giant mound of flesh and machinery the size of a small mountain, with horns and spikes rising form its back.  It has two faces; one, the face of a horrid demon that is split in half by the second face, which is of a beautiful woman, the demonic parts sitting above and below those of the woman.

Age: At least 400 years old | Unknown, though much older

Attack Potency: Multi-Continent level (On her own, her power is described as strong enough to cause oceans to boil and to rip the earth open. Also, in her fight with the Dragon Knight, she was sinking whole continents and moving the entire axis of the planet.) | Multi-Continent level (Was able to easily kill Dark Schneider.)