VS Battles Wiki
Register
Don't have an account?
Sign In
Advertisement
in: Unknown Tier, Characters, The Twilight Zone,
and 28 more 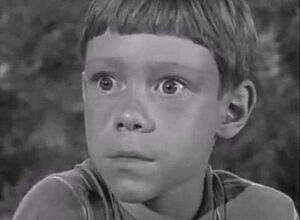 Anthony Fremont referred to by narration as "The Monster" is a young child from Peaksville, Ohio. Although Anthony would appear as a good-natured, simple boy to most, Anthony is, in fact, an extraordinary reality-warper who was capable of destroying and creating as he pleased. Anthony didn't like bad thoughts, in fact, he sent all those who thought badly to the "cornfields", much like he did with everyone who was annoying or those who sang.

Attack Potency: Unknown (Made all of the world but Peaksville, Ohio disappear with only a thought. This was done as a baby, and his powers have only grown since then. Conjured a snowstorm of unknown scale just by thinking). Ignores durability with his powers.

Intelligence: A simple-minded child. Otherwise average as an adult.

Weaknesses: Is very emotional and very suspicious of other people. He cannot reverse what he did with his Reality Warping.