VS Battles Wiki
Register
Don't have an account?
Sign In
Advertisement
in: Unknown Tier, Tier 3, Tier 3-C,
and 30 more 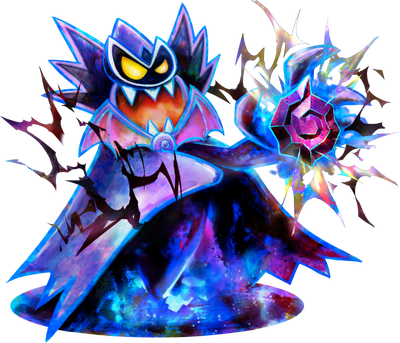 Antasma (Japanese: アックーム, Akkumu) is one of the main antagonists in Mario & Luigi: Dream Team.

Many years ago, he was once a normal bat living on Pi'illo Island. He was feeding on the nightmares of the Pi'illo race which eventually turned him into a living infestation of nightmare itself. Seeking domination, he stole the Dark Stone, stone made of pure nightmares and the dark equivalent of the Dream Stone, and waged a war against the Pi'illo Kingdom. The Pi'illos, along with the Zeekeeper, fought Antasma to stop his wishes from coming true and managed to imprison him into the Dream World; however, just before his seal was complete, Antasma shattered the Dark Stone, causing the chunks to rain down all over the island. The shards of the Dark Stone turned all the Pi'illo into stone, causing the demise of the Pi'illo civilization.

Self-Sustenance (Types 2 and 3) Healing, Duplication, Absorption (Can passively absorb dream energy from anyone who is sleeping), Soul Manipulation and Sleep Manipulation, Life Manipulation, Dream Manipulation (Has power over dreams and can manipulate all dream worlds, able to make dreams become reality), and Existence Erasure (Bowser was going to erase Mario and Luigi from existence before the Dream Stone was shattered, the Dark Stone should be comparable), Reality Warping, Sealing

Speed: Massively FTL+ (Was able to keep up with Mario and Dreamy Luigi, the latter being able to jump into space and grab a star in a few seconds)

Range: Standard melee range, at least tens of meters with most attacks, interdimensional with portal creation | Multiversal with Dark Stone

Intelligence: Above Average (Ever since his imprisonment, he makes careful and calculating decisions to avoid mistakes)

Weaknesses: Antasma can be jumped-on easily when in a false sense of security and needs to be in the Dream World to achieve greater power but his ability to create Dream Portals and forcefully drag opponents into his Dream World negates the latter weakness

The Snatcher (A Hat in Time) The Snatcher's Profile (Dream World Antasma and Ultra Snatcher were used, and speed was equalized)