VS Battles Wiki
Register
Don't have an account?
Sign In
Advertisement
in: Tier 7, Tier 7-B, Tier 2,
and 97 more 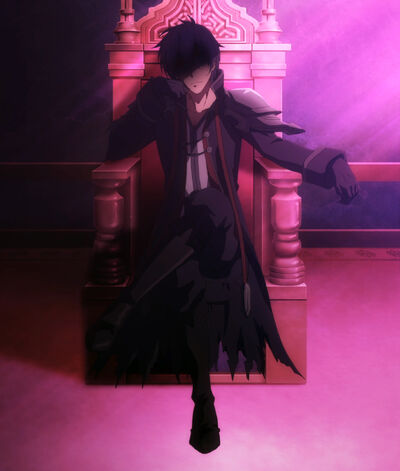 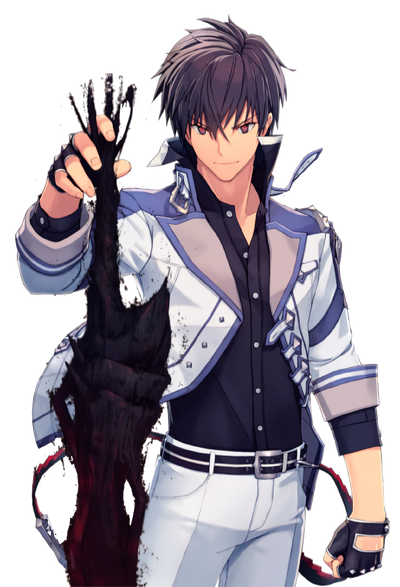 Anos Voldigoad (アノス・ヴォルディゴード, Anosu Vorudigōdo) is the reincarnation of the man who was feared as the Demon King of Tyranny 2,000 years ago, and is the main protagonist of Maou Gakuin no Futekigousha.

All previous powers in addition to Limited Void Manipulation & Limited Nonexistent Physiology (Nature Types 2, 3 & Aspect Type 2 for his source; Anos' source is fused with[88] Graham's nothingness, and he is capable of using the latter's nothingness as a "shield", which converts anything it interacts with into nothingness, to protect himself or to attack[89])

All previous powers in addition to Statistics Amplification & Statistics Reduction (Can grab magic and either amplify or reduce its raw power via <Rayon>[90]), Subjective Reality (Can unilaterally determine the order of the domain to what he believes it to be via <Hilyam Pelem>[91])

Resistance to Fear Manipulation (Remained unafraid even after sensing Ivis Necron's magic power, which caused an entire classroom of students to feel fear[101]), Deconstruction, Mind Manipulation, Sleep Manipulation (Unaffected by the Magic Eyes of Destruction[102]), Space-Time Manipulation (Resisted and destroyed Eugo La Raviaz's time stop.[103] Stopped an attack which ruptured space-time with his bare hands[104]), Pain Tolerance (Capable of staying alive and unbothered for a long duration of time even after his source was damaged by <Evansmana>.[105] Additionally, an average person would be destroyed after only a short duration of time if their source is damaged[106]), Existence Erasure (Unaffected by <Beno Yeven>[107]), Attack Reflection (Unaffected by anti-magic circles, weapons, and reflection barriers[108]), Power Modification (Anos' powers do not obey Nousgalia's divine orders[109]), Power Nullification (Can use his powers in areas which are supposed to nullify his powers[110]), Death Manipulation (Resisted Kaihilam's cursed mud which kills anything it touches[111]), Resistance Negation (Has resisted numerous gods' powers even though gods' powers can only be resisted by other gods[112]), Fire Manipulation (Unaffected by Anahem's Withering Desert which burns anyone who enters it[113]), Ice Manipulation (Resisted Arcana's Moon of Creation <Artieltonoa> which can freeze a person in the blink of an eye to the extent that they can never melt[114]), Power Nullification, Paralysis Inducement, Perception Manipulation, Mind Manipulation (Resisted Wesnera's divine chains which completely suppress the target's magic power, body, 5 senses, and thoughts[115]), Greater Existence Erasure, Law Manipulation, Conceptual Manipulation (Type 1; Resisted Aberneyu's Sun of Destruction <Sargeldonave>, an authority that utilises the Order of Destruction, which destroys everything on sight, including a person's source (concept)[116]), Fate Manipulation (Capable of changing, destroying[117], and overturning fate.[118] Resisted and destroyed Eques' <Beld Rase Femblem>, which induces an inescapable predetermined fate that affects the target even if they go back to the past before the creation of the world and use their power.[119] Additionally, <Beld Rase Femblem> can even affect "misfits"[120] (Type 4 Acausals)), Unconventional Resistance to Soul Manipulation & Mind Manipulation (An excellent magician can keep their memories in their source, which is the fundamental concept of existence that exists deeper than the body, soul and mind, and even if the physical body perishes, as long as the source is intact, they can be revived. In other words, they can act, "think", and utilise powers with only their source (concept), and therefore have unconventional resistance to conventional powers that affect the soul or mind)

Can wield <Venuzdonoa> and utilise all of its powers and resistances.[121]

Attack Potency: City level (His battle with Lay Glanzudlii created earthquakes, blew away the surrounding vegetation, caused rivers to dry up, blew away the clouds, and caused a mountain vanish[122]). Multiverse level, possibly Multiverse level+ with <Venuzdonoa> | Large Planet level (As a result of Reincarnation <Silica>[123], he could previously only use less than one tenth of his power compared to his prime self.[124] Moved the moon to create a solar eclipse[125]). Universe level+, up to Multiverse level via <Egil Grone Angdroa> (Extreme Hell World Destruction Ash Magic Mortar <Egil Grone Angdroa> unleashes apocalyptic flames that burn, destroy and reduce everything to ashes. It burns what should not be burned, destroys what should not be destroyed, and reduces the entire universe to ashes. It only has the form of a flame, but is actually a completely different thing.[126] If the apocalyptic flames are not controlled, it will destroy hundreds and thousands of universes[127]). At least Universe level+, likely higher via <Gilieriam Naviem> (Nirvana Seven Steps Conquest <Gilieriam Naviem> releases the destructive power condensed at Anos' source with each step and raises the level of all power. Anos destroyed the traces of things (700 million years sections of the Militia World timeline) and the Land of Traces (70 billion years section of the Militia World timeline) merely by walking six steps. If the seventh step was unleashed, the universe would have been destroyed a thousand times over, and there would still be power to spare.[128] Anos also increased the lowest level fire attribute magic <Grega>'s power enough to harm Eques, who is capable of destroying the universe, by walking six steps. If the seventh step was unleashed, the Demon King's Garden would have been destroyed[129]). Multiverse level, possibly Multiverse level+ with <Venuzdonoa> | Universe level+ (Anos can destroy at least one of the universes of the Silver Sea with only his fists.[130] Can harm deeper world inhabitants). Higher via world-destroying magic (<Egil Grone Angdroa> or <Gilieriam Naviem>). Multiverse level, possibly Multiverse level+ with <Venuzdonoa> | Unknown, likely Multiverse level, possibly Multiverse level+ (Anos constantly suppresses his destructive power by offsetting his own power with his own power, and normally controls only the barely remaining power after that, all to prevent the universe from being destroyed by his mere presence.[131] It is implied that Anos' true destructive power is on par with <Venuzdonoa>. Anos is a near-perfect Lion of Destruction[132] which is capable of destroying[133] the Silver Sea)

Speed: At least FTL, up to Immeasurable combat speed and reactions (Comparable to his prime self, as Reincarnation <Silica> does not affect his speed) | At least FTL (Faster than Gazel Apt Ageila who literally turned into light itself and achieved lightspeed in an attempt to intercept Anos.[134] Superior to Shin Reglia who can far exceed the speed of light[135]), up to Immeasurable combat speed and reactions (Reacted to, blocked, and caught Eges Code's Crimson Blood Magic Spear <Dihiddoatem>[136], which transcends space-time[137], and has no concept of "time" or "distance between opponents", and any kind of armour or speed is nothing in front of it.[138] Fought against and kept up with Eques, who could both travel through time and seemingly skip time via sheer speed[139]) | At least Massively FTL (Can keep up with deeper world inhabitants), up to Immeasurable combat speed and reactions (Same as before) | Immeasurable (Same as before)

Lifting Strength: Class M (Lifted a castle) | Immeasurable (Moved the moon to create a solar eclipse.[140] Stopped Eques' attack which attempted to overwhelm and crush Anos with the weight of the universe (space-time continuum)[141]) | Immeasurable | Immeasurable

Striking Strength: City Class | Large Planet Class | Universal+ (Anos can destroy at least one of the universes of the Silver Sea with only his fists[142]) | Unknown, likely Multiversal, possibly Multiversal+

Stamina: Superhuman (Can continue fighting without any issues or signs of pain despite having his heart crushed[144], his arm cut off[145], or his source damaged.[146] Capable of fighting against Graham's source for hundreds of millions of years continuously[147]). Limitless as approaching destruction (As Anos approaches his own destruction, his magic power increases infinitely[148])

Intelligence: At least Extraordinary Genius, likely Supergenius (Anos memorized and learned a complicated magic formula in 1 second which took Sasha 1 month to learn, and then proceeded to complete the formula which even the creator wouldn't have been able to do for another 1000 years after witnessing it only once.[150] Anos effortlessly deciphered hundreds of thousands of magic characters with one look which would take an accomplished mage a whole day to do.[151] Anos is knowledgeable about the atomic structure of objects, and when he uses creation magic to create an object, he doesn't just create the object but also the atoms that make up the object.[152] Anos has mastered almost all magic[153] and also developed Origin Magic, a completely new and powerful type of magic.[154] Anos read and perfectly memorised 1,799 books in mere moments.[155] After seeing the magic <Rayon> being used only once, Anos learned and recreated the unknown magic characters and formula instantly.[156] Anos is capable of performing 100 parallel thoughts simultaneously even under high pressure via <Likness>, which even magicians that mastered this magic are incapable of.[157] Anos consistently develops new and powerful magic and also copies and improves upon the already existing magic of his opponents during combat. Anos created Venuzdonoa which can destroy all things in creation.)

Weaknesses: <Evansmana> and other powerful holy swords from the Holy Sword World Hyfolia negate certain abilities related to Anos' source, and were specifically created to harm Lions of Destruction; However, Anos is not weak against other forms of Holy Manipulation.