VS Battles Wiki
Register
Don't have an account?
Sign In
in: Characters, Movie Characters, Live-Action Characters,
and 14 more 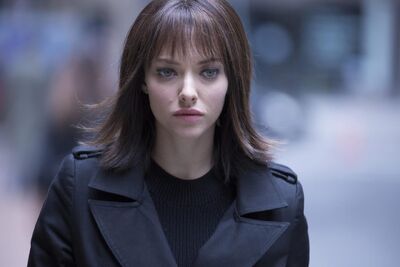 Powers and Abilities: Capable Gun user, Information Analysis/Manipulation (She can hack into the Ether and doing so she also has access to the history and entire records of every human being, the interconnected database is virtually within her control), Optic Illusions (Can "patch" data, effectively loading unrealistic information into another human's sense of reality), Memory Manipulation

Range: Several Meters with Pistol, Varies via hacking(she has instant access to cyberspace from anywhere)

Intelligence: Genius. She is one of the few hackers who can stay anonymous from the authority.

Weaknesses: Hackers such as Cyrus can stay hidden from her Mind's Eye.

Ether: In the distant future, the whole human race/or planet is connected to a database called "Ether", and this "there" makes privacy nearly non-existent. Every event is recorded, because everything is connected everything is also vulnerable. Anon has far more in-depth access to this database than regular humans, her capabilities in searching chains of proxies is almost unmatched.

Patching: All personal information are continuously engraved in the databank called Ether, Anon can patch/erase the memories of others which are stored there with hacking, overloading another being's mind with data of her choosing. Because that every living being's perspective records and transmits data to the ether, she can thus force humans to see things from her perspective of sight and connect to others.