VS Battles Wiki
Register
Don't have an account?
Sign In
Advertisement
in: Goosebumps, Villains, Toys,
and 19 more 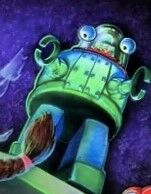 The Annihilator 3000 is a toy robot that appeared in the Goosebumps book Toy Terror: Batteries Included as a villain.

Powers and Abilities: Inorganic Physiology (Type 2), Self-Sustenance (Types 1), Energy Projection and Heat Manipulation (Has laser vision that can vaporize it's target), Ice Manipulation (Can freeze others solid), Duplication (Has been seen to make smaller versions of itself)

Attack Potency: Below Average Human level (Is physically a toy), Small Building level (Can vaporize and freeze humans. Said that it was destroying the entire house)