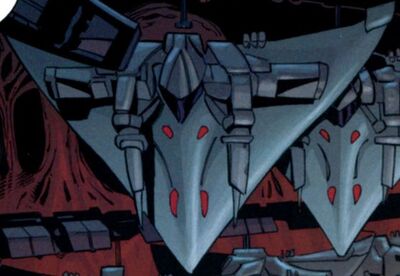 The Annihilator-class starfighter was a type of starfighter manufactured by the One Sith. They were triangular in shape, and according to Darth Krayt, faster and more maneuverable than any other fighter of the time. Through the dark side, the pilot and ship would become one, and the fighters carried enough fire power to breach a Star Destroyer. The ships, along with a number of Sith troopers were housed in a secret location in the Valley of the Dark Lords on Korriban, and were part of Darth Krayt's new offensive after his resurrection.

Attack Potency: Likely Country level (Stated by Darth Krayt to have the firepower to breach a Pellaeon-class Star Destroyer, And has the firepower to pierce the shields of a Scythe-class Battle Cruiser)

Speed: Supersonic in atmosphere (Stated to be faster and more maneuverable than any other fighter of the time period, which would make it faster than TIE Predators which have a speed of 1,500+ km/hr). Can accelerate continuously to Sub-Relativistic+ speeds in space (Comparable to the likes of the TIE Interceptor), Massively FTL+ travel via Hyperdrive (Though its Hyperdrive class is never stated it should likely at least a Class 2 if not a Class 1 due to being a combat starfighter)

Durability: Large Building level+ (Built from stronger materials than the standard TIE Fighter and includes durasteel plating), At least Town level+ with Deflector Shields (Equipped with a basic deflector shield generator. Likely in the same league as that of the likes of the A-wing Interceptor)

Retrieved from "https://vsbattles.fandom.com/wiki/Annihilator-class_Starfighter?oldid=4992949"
Community content is available under CC-BY-SA unless otherwise noted.