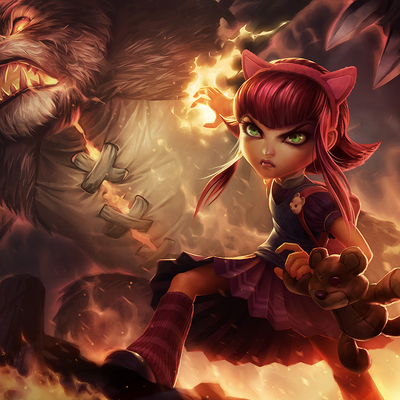 Dangerous, yet disarmingly precocious, Annie is a child mage with immense pyromantic power. Even in the shadows of the mountains north of Noxus, she is a magical outlier. Her natural affinity for fire manifested early in life through unpredictable, emotional outbursts, though she eventually learned to control these “playful tricks.” Her favorite includes the summoning of her beloved teddy bear, Tibbers, as a fiery protector. Lost in the perpetual innocence of childhood, Annie wanders the dark forests, always looking for someone to play with.

Age: Appears to be somewhere between 8 and 10

Attack Potency: Town level (Despite having yet to reach her full potential and master her powers, Annie is considered one of the most powerful mages in the world, so much so that she is considered a magical outlier among other mages, which would put her above the likes of Lulu and Lux)

Weaknesses: Has yet to master her powers

Retrieved from "https://vsbattles.fandom.com/wiki/Annie_Hastur?oldid=5144354"
Community content is available under CC-BY-SA unless otherwise noted.