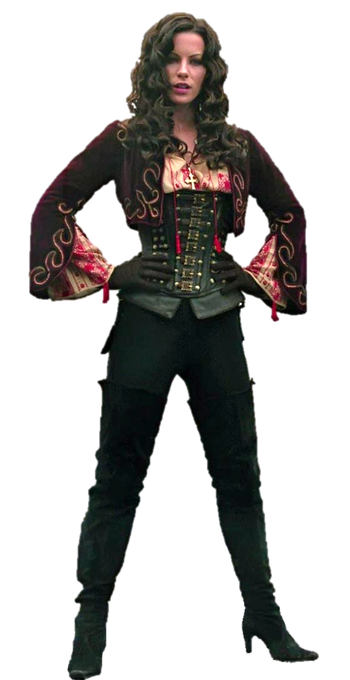 Princess Anna Valerious is one of the main characters in the Van Helsing Movie and a native of a village in Transylvania. She is the descendant of Valerious The Elder, daughter of King Boris Valerious and sister of Prince Velkan Valerious. Count Dracula has been killing her family and she wants revenge--in addition her family cannot leave purgatory until he is killed. Anna also holds a personal grudge with Aleera for reasons unknown. She is the love interest of Van Helsing and is played by Kate Beckinsale in the 2004 film.

Anna is shown to be very strong willed and stubborn, despite how much trouble it gets her into. She is determined in her quest to save her brother and slay Dracula, lifting the curse from her family. Despite her tough exterior, her caring nature shines through in her concern for her family and Van Helsing, despite being a bit cold to the vampire hunter in the beginning of the film.

Tier: 10-A, up to 9-B with weapons and Preparation

Attack Potency: At least Athlete level by herself (She is a highly athletic and trained person ), Up to Wall level with Preparation and weapons (Capable of killing Vampires)

Stamina: High (Has shown to be able to run and fight for long periods of time)

Intelligence: Above Average. She is described as a highly intelligent person.