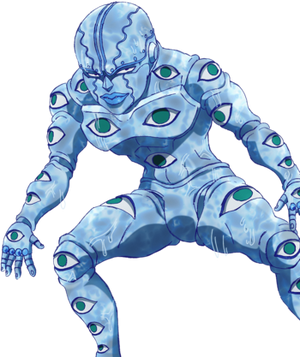 Anjuro Katagiri (片桐 安十郎 Katagiri Anjūrō) is a minor antagonist from JoJo's Bizarre Adventure Part IV: Diamond is Unbreakable. At the age of 12 he was found guilty of robbery and rape, for which he spent the following 20 years behind bars. The day before his execution, he was shot with a Stand Arrow by Keicho Nijimura, which led to him developing a stand right before being hanged. He is a ruthless, despicable, and vindictive serial criminal who despises people whom he considers "cocky."

Powers and Abilities: Superhuman Physical Characteristics, Genius Intelligence, Extrasensory Perception (Capable of seeing ghosts and souls among some other supernatural forces that are normally otherwise invisible), Capable of communicating through his Stand, Aura, and Summoning (Of his Stand). Aqua Necklace has Superhuman Physical Characteristics, Regeneration (Low-High), Extrasensory Perception (Much like its user), Non-Physical Interaction (Stands can interact with ghosts and other Stands), Elemental Intangibility (Is comprised of liquids. Can also turn itself into steam and fog in certain situations), Possession, Small Size (Type 2), Body Control, Shapeshifting (Can transform itself into any type of liquid and even make minor immaterial objects out of itself), Water Manipulation, Limited Air Manipulation (Can turn itself into fog and steam in the right circumstances), Minor Invisibility (Stands can only be seen by other Stands and Stand Users, though the liquids the Stand is bound to can still be seen)

Stamina: Above average (Patiently spied and waited to exact revenge on Josuke for three days. Survived his own hanging as well as being shot by the Stand Arrow)

Range: Standard melee range, hundreds of meters with Aqua Necklace (Was able to operate his stand inside Josuke's house while he himself remained up in a tree)

Weaknesses: Sadistic and psychotic. Any damage sustained by Aqua Necklace will be reflected onto Anjuro.