VS Battles Wiki
Register
Don't have an account?
Sign In
Advertisement
in: Tier 5, Tier 5-A, Guilty Gear,
and 28 more 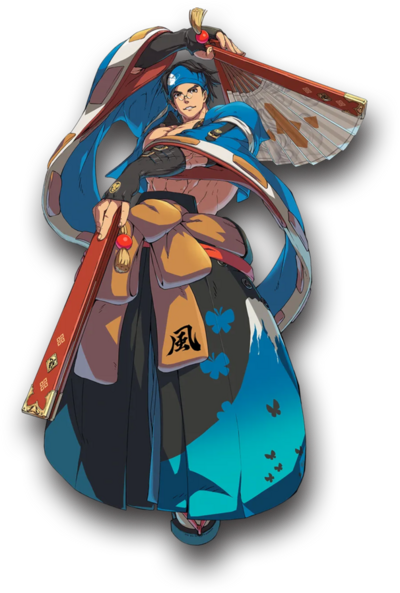 Anji Mito (御津 闇慈, Mito Anji) is a character from the Guilty Gear series of fighting games. In the Guilty Gear universe he is one of the few Japanese survivors (the others being Baiken and May). For much of the story, he pursued the enigmatic That Man in order to confirm his theories about the origin of Gears, but he has recently been serving as Baiken's traveling companion since Happy Chaos was revealed to be the cause of Japan's destruction. He wields a powerful artifact called Zessen, which appears as two large hand fans, and incorporates traditional Japanese dance techniques into his fighting style.

Classification: Human, Affiliate of That Man

Powers and Abilities: Superhuman Physical Characteristics, Weapon Master and Expert Hand-to-hand Combatant, Extrasensory Perception (Can see souls), Non-Physical Interaction (Can hit souls), Magic as Information Manipulation, Chi Manipulation (As a Japanese person, he is an extremely skilled ki user), Air Manipulation (naturally, but amplified by Zessen), Radiation Manipulation, Sound Manipulation, and Electricity Manipulation with Zessen, Able to spy people from long distances, Statistics Amplification, Energy Projection and Transmutation (Can create birds, butterflies, dragons, and constraints made of energy, or convert physical objects into energy and dissipate them), Flight (can fly using clouds of his energy constructs), Spatial Manipulation and Forcefield Creation (Zessen can create dimensional barriers), Teleportation, and Regeneration Negation (Up to Low-Mid, as Outrage can kill Gears who have regeneration of this level)

Speed: At least Relativistic+, likely higher (Able to keep up with Sol Badguy, Chipp Zanuff, and Happy Chaos. Fought against I-no in GGXX)

Lifting Strength: Class P (Can match large class Gears, which are said to be around 14 trillion tons)

Stamina: Very high. Able to fight and use Zessen while severely beaten up, even though using it is physically and mentally stressful.

Range: Tens of kilometers normally (The dimensional barrier projected by Zessen enveloped the entirety of the Japanese colony), thousands of kilometers with attacks

Standard Equipment: Zessen, an artifact which can manipulate air, chi, sound and electromagnetic signals, teleport and create dimensional barriers. One of the eight pieces of Outrage, an extremely powerful anti-Gear weapon built by Sol Badguy.

Intelligence: Above Average. Correctly intuited the origin of Gears and the true identity of That Man without any firsthand information. Also a skillful dancer.

Weaknesses: Impulsive. Rarely thinks about the consequences of his actions before doing them. However, his evasive fighting style compensates for this somewhat.