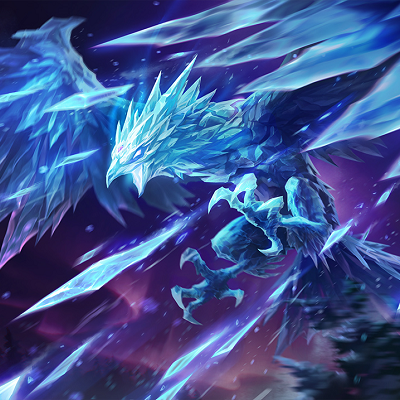 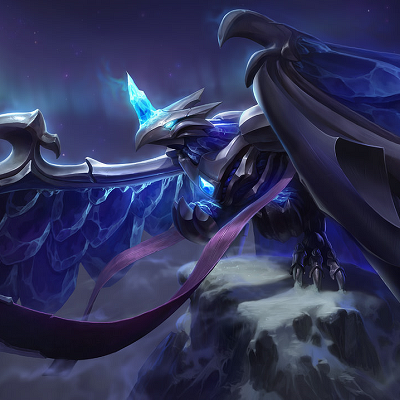 Anivia is a benevolent winged spirit who endures endless cycles of life, death, and rebirth to protect the Freljord. A demigod born of unforgiving ice and bitter winds, she wields those elemental powers to thwart any who dare disturb her homeland. Anivia guides and protects the tribes of the harsh north, who revere her as a symbol of hope, and a portent of great change. She fights with every ounce of her being, knowing that through her sacrifice, her memory will endure, and she will be reborn into a new tomorrow.

Classification: Cryophoenix (The Great Spirit of the Phoenix), Guardian of the Freljord, Avarosan

Powers and Abilities: Superhuman Physical Characteristics, Immortality (Types 1, 3, 4, 6 [The Great Spirit of the Phoenix is able to create avatars in the physical world by possessing Spirit Walkers and mortals], 8 [As long as the Freljord and its people exist, Anivia's soul will be immortal], and 9 [Anivia's true body, the Great Spirit of the Phoenix, resides in the Spirit Realm]), Flight, Resurrection, Statistics Amplification (Durability Amplification Via Rebirth), Avatar Creation, Size Manipulation, Large Size (Types 1 to 3) Empowerment (Gets more powerful the more people worship her), Ice Manipulation (Ice and Snow were created by her first birth. Created True Ice, a type of Ice that never melts and concedes immense amounts of power), Heat Manipulation (The first beats of her wings turned the air of the Freljord into cold winds, which are cold enough to shatter metal on contact), Magic, Status Effect Inducement (Can Stun opponents Via Flash Frost, Can Slow opponents Via Flash Frost and Glacial Storm), Damage Boost (Via Frostbite), Weather Manipulation, Can see through illusions/mind-affecting abilities (Easily identified Lissandra as a threat to the Frejlord), Incorporeality (Is capable of taking and leaving physical form at will)

Attack Potency: At Least Small Country level (Anivia is the embodiment of the Freljord's raw power, capable of creating blizzards that can cover the entire Freljord, sustains a never-ending storm that destroys everything it encompasses. Every time she dies she releases enough elemental energy to freeze the Freljord. Comparable to Ornn and Volibear)

Speed: Subsonic reactions and combat speed (Should be comparable to the other Freljordian Demi-Gods Ornn and Volibear, Was able to intercept an attack from Gnar)

Range: Hundreds of kilometers with powers

Intelligence: Extremely high (Has been alive before mankind existed, and has died and been born thousands of times)