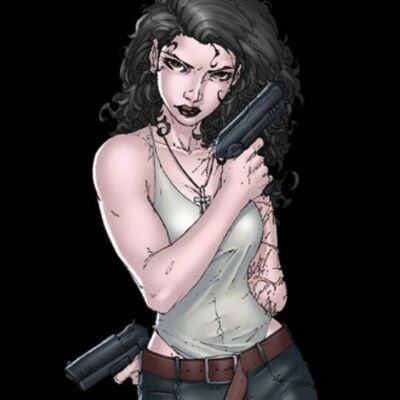 Anita Blake is a petite woman of mixed German and Mexican heritage with curly long hair and pale skin with scars scattered over her body. She is very direct and flippant in her speech, but is said to be highly competent in the professions she is involved in. At the start of the series, she is an animator (a person who raises zombies) and a vampire executioner.

Name: Anita Blake, The Executioner, War, The Queen of Tigers, The Mother of the Dawn.

Attack Potency: Street level (Can kill most vampires and lycanthropes) | Continent level (Able to kill Mister Oliver, who created the modern setting of the Continents from Pangaea).

Speed: Superhuman (Able to keep up with some vampires) with Supersonic reactions (Can react to Micah, a bullet-timer)

Lifting Strength: At least Above Average Human (Stated to lift her own body weight)

Durability: Superhuman (Can survival a thrashing from most vampires or lycathropes) | Continent level (Took a beating from Mister Oliver, who created the modern setting of the Continents from Pangaea).)

Weaknesses: Standard human weaknesses, If one of the Triumvirate dies, they all die.

Note: Anita has the ability to call Tigers and they possess special abilities, like elemental manipulations. The OP should state whether or not Anita has access to her full arsenal or just herself.