VS Battles Wiki
Register
Don't have an account?
Sign In
in: Fire Users, The Black Heart, Summoners,
and 12 more 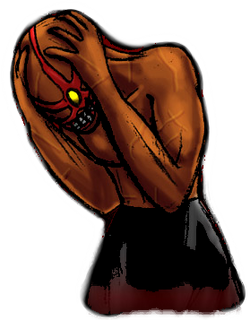 Animus has been locked inside an iron maiden for more than 400 years. Back in 1605, by decree of the prince, a troop of soldiers from the other world was sent to capture the iron maiden. The guards retrieved it, from the basement of a huge castle in Transylvania, unaware of its contents. Once in the other world, it was put under strict guard in a prison. But, one day, that iron maiden opened and Animus was released. An inner voice spoke to him/her telling him/her to go to Chaos and find a creature called Final. Animus starts a journey to learn his/her identity and hunts answers to the many questions that have plagued him/her for so long. Why does he/she suffer so much? Why can't he/she die? He/she only wishes to be free after more than 400 years of endless suffering.

Gender: Varies (Changes at will)

Classification: Half Human, Half Creature born from Chaos

Attack Potency: Small Building level (Can somewhat damage Final; comparable to the other fighters like Peketo)

Lifting Strength: Class 1 (Can carry a Shar-Makai, who weighs enough to shake the ground)

Durability: Small Building level (Can tank Final's lasers which can disintegrate a human almost instantly and takes up the entire area)

Stamina: Has fought and kept up with Peketo, who has infinite stamina due to being a ghost

Range: A couple of meters, anywhere with torture devices

Intelligence: Unknown (Was in an iron maiden since infancy, but when released knew how to speak, so probably basic human intelligence)

Weaknesses: Immortality can be canceled out with a highly powerful magic object, such as the King's Heart does for him, although the power of the King's Heart is unknown; wants to die so he/she may let people get in fatal blows; lacks experience