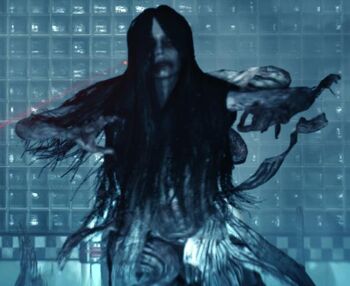 Anima is a special enemy encountered in The Evil Within 2.

Anima is a mysterious creature haunting the streets and many residents of Union. While she seems to target Sebastian Castellanos specifically, multiple logs and diary entries found throughout the town suggest that she picks her other targets randomly, following and tormenting them for some time until they finally cave in from paranoia, or until she decides to just kill them herself. Anima is only visible to her victims.

Origin: The Evil Within

Powers and Abilities: Superhuman Physical Characteristics, Life-Force Draining, Intangibility, Mind Manipulation and Transformation (Can turn Sebastian into a Lost. Is heavily implied to be what's been turning all of Union's citizens into the Lost), Telekinesis (Uses it to expose Sebastian from behind cover), Invisibility (Can only be seen by her victims), Flight, Teleportation

Attack Potency: At least Wall level, possibly higher (Vastly stronger than Sebastian who can fight hordes of Haunted by himself. Stronger than most creatures encountered in Union)

Lifting Strength: Superhuman (Can easily lift grown-men like Sebastian by herself and can lift and throw heavy objects with Telekinesis)

Durability: Unknown (Sebastian never fought her and got rid of her by shooting his doppleganger in the head, making her diseappear)

Retrieved from "https://vsbattles.fandom.com/wiki/Anima_(The_Evil_Within)?oldid=4583537"
Community content is available under CC-BY-SA unless otherwise noted.