VS Battles Wiki
Register
Don't have an account?
Sign In
Advertisement
in: Characters, Male Characters, Mind Users,
and 26 more 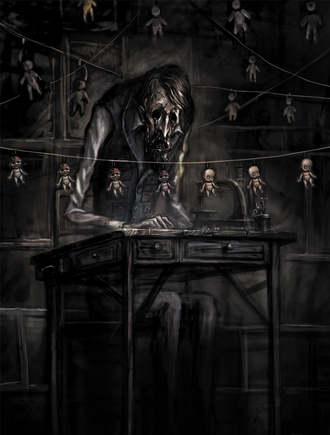 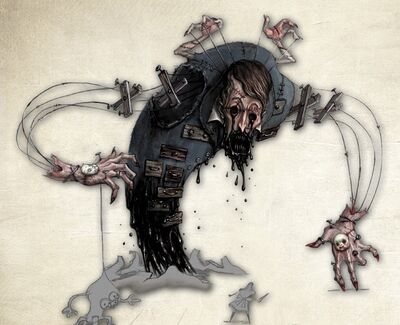 Dr. Angus Bumby, also known as The Dollmaker while in his Wonderland incarnation, is the main antagonist of the videogame Alice: Madness Returns.

Angus Bumby was Alice Liddell's manipulative psychiatrist and the head of the Houndsditch Home for Wayward Youth in London. Bumby appeared to help Alice, along with the other orphans who lived there, to forget about traumatic events in their past using hypnotherapy. However, it was revealed that he had much darker motives, and a greater role in Alice's past than she first realized.

Alice saw his image as part of the tentacle creature known as the Leviathan, but he disappeared after a while.

Age: Likely in his late 40s

Classification: Psychologist, Head of the Houndsditch Home for Wayward Youth, Conductor of the Infernal Train (as the Dollmaker)

Powers and Abilities: Hypnosis, Memory Manipulation (Via Hypnosis, erased the memories of multiple children to make them forget what he did to them, to the point they even forgot their name, and force them into prostitution), Social Influencing | Superhuman Physical Characteristics, Corruption (Type 2, is the origin of the Ruin, the dark goo that started to affect Wonderland and Alice's mind so he could rewrite it as he wanted), Memory Manipulation (The Ruin was erasing Alice's memories about the fire and her past), Creation (Created the Infernal Train and the Ruin), Vehicular Mastery (Holds control over the Infernal Train), Breath Attack (Can vomit Ruin), Summoning (Can summon Ruin monsters), Transformation (Can turn children into dolls), Telekinesis (Is able to mentally control different parts of his body such as his hands), Shapeshifting

Attack Potency: Likely Human level | At least Wall level (Was able to fight Alice for an extended period of time and is comparable to her), likely higher (Was using the Infernal Train and the Ruin to slowly destroy Wonderland, usurping the Queen of Hearts' control over it)

Speed: Unknown, likely Average Human | Superhuman (Faster than Alice and can control the parts of his physical body at this speed)

Lifting Strength: Unknown | Superhuman (Is vastly stronger than regular humans and can easily lift children and full-grown men and women with one hand)

Durability: Likely Athletic Human (Should be superior to Alice) | At least Wall level (Can survive to Alice's strikes and attacks from her weapons)

Standard Equipment: His Pocket Watch, The Infernal Train (as the Dollmaker)

Intelligence: Very High. Bumby is an extremely manipulative individual who uses his skills in psychology and hypnosis to force children to forget their life and then force them into prostitution without any consideration for them. He is also very convincing and knows how to make himself charismatic and sympathetic to others, appearing to be a respectable man of society as people perceived him as a helper of unfortunate children and a therapist who helped traumatized and mentally broken orphans to forget the negatives of their past, while he's, in fact, a depraved monster.

Weaknesses: Due to his reputation as a well-respected man, Bumby is extremely arrogant and thinks he's untouchable.