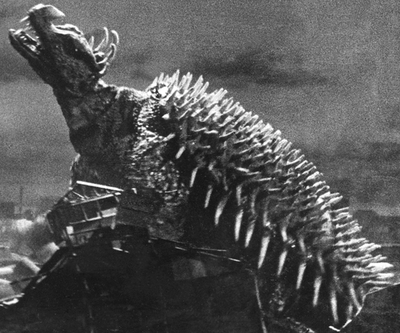 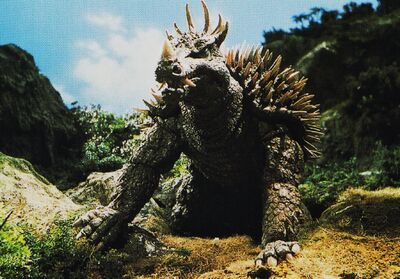 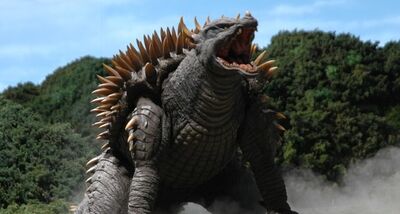 Anguirus is a four-legged dinosaur-like creature that looks similar to an ankylosaurus. He has several horns at the top of his head and a single horn above his nose like a rhinoceros. His face is long and drawn out, like a crocodile, and has rows of jagged, serrated teeth. His carapace is studded with long, sharp spikes. Anguirus' tail is longer than his body and makes up most of his body length, and is also covered with spikes. His hind limbs are longer than his forelimbs, enabling him to stand up on them to his full height, but he generally walks upon all fours.

Age: Unknown, likely at least around 200 million years, possibly higher (His species is speculated to have co-existed with Godzilla's, shouldn't be much younger or older than both the first and second Godzilla's)

Lifting Strength: At least Class M, possibly higher (Never lifted another Kaiju, but was capable to pushing over them, heavier than Godzilla and was capable to knocking Godzilla over, heavy as Showa King Ghidorah) | Class M

Durability: Small City level (Was completely unfazed after hitting the ground this hard. Survived being stomped into the ground by King Ghidorah) | Small Country level (Undamaged after Godzilla kicked him around and used him as a projectile weapon)

Stamina: Massively Superhuman (Fought after large injuries, such as a broken jaw or Gigan's buzzsaw)