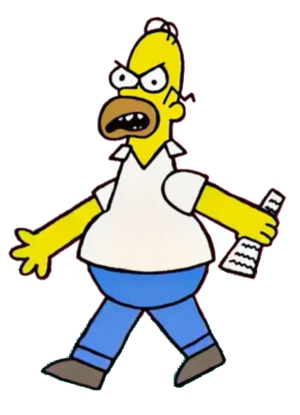 Angry Dad is a fictional character made by Bart Simpson from The Simpsons. It is about a father who has extremely bad anger issues, throwing fits over the smallest problems he runs into. This show being based on his father, Homer Simpson, and his anger problems.

Attack Potency: likely Street level normally, possibly Wall level (Should be comparable to his durability), Large Building level when giant (Grew so big, he completely shattered the building he was in before reaching max height, Could destroy buildings by walking on them, At his max height, he should be much stronger Punched a large hole in a water dam)

Speed: Normal Human (Kept up with a raccoon on foot which run up to 15 MPH), Subsonic when Giant, via sheer size

Lifting Strength: Regular Human normally, Class 50 when Giant (Can frank and carry all the water inside a dam)

Durability: Street level normally (Took a ketchup bottle exploding in his face hard enough to send him across a room into a wall), possibly Wall level His crash might have broken his chair while off screen), Large Building level When Giant (Survived growing inside a building with no effects, comparable to his attack potency)

Range: Standard melee range, Extended melee range with an axe, Meters with a Scythe, Dozens of meters when giant via sheer size

Intelligence: Unknown, Implied to be stupid (He doesn’t show much on screen, but has implied blown up the plant multiple times)

Weaknesses: Extreme anger issues, Enough anger can cause his to blow up his own eyes and or head entirely