VS Battles Wiki
Register
Don't have an account?
Sign In
Advertisement
in: Characters, Male Characters, Evil Characters,
and 33 more 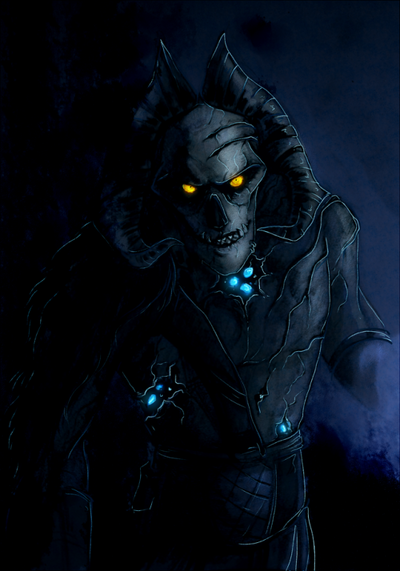 In 1297 A.D. in Bulgaria's Black Sea, Angor Rot's village was caught in Gunmar's war for control of the surface. Angor sought power in order to protect his village; and thus made a deal with the witch Morgana, in exchange for a piece of his flesh. Morgana took advantage of him by taking his soul and transferring it into the Inferna Copula, a ring that she can use to control him. She then ordered him to seek out and murder the Trollhunters; Merlin's champions.

For centuries, Angor Rot has killed dozens of Trollhunters and harvested their souls. At some point, Angor decided to hunt Merlin himself, though he had failed and was instead imprisoned within the Temple of Aysa-Thoon. Centuries later, Stricklander and Otto discovers the temple. Angor reawakens and attacks both of them, but Stricklander had managed to pick up the Inferna Copula beforehand and then was able to use the ring to control Angor Rot. Angor was then given orders by Strickler to kill Jim Lake Jr., the current Trollhunter.

Age: At least a thousand years (lived during 1297 AD and should be as old as Draal)

Powers and Abilities: Superhuman Physical Characteristics, Stealth Mastery, Magic, Energy Projection, Immortality (Type 1), Enhanced Senses (Per being a Troll, which gives him acute sense of smell as well as sight), Regeneration (High-Low: Regenerates from carving out his own body), Acrobatics, Skilled hand-to-hand combatant, Weapon Mastery (With a dagger, Shadow Staff and sword), Portal Creation and BFR with Shadow Staff (Can create portals as a means of transportation or can use it to transport people into the Shadow Realm), Petrification with Creeper's Sun Poison (Can imbue his weapons with Creeper's Sun, which is able to turn objects into stone when cut by it. The time it takes for one to be petrified depends on the severity of the cut), Summoning (With his Animus Totems, when a totem comes contact with inanimate objects, they become Golems that follow his command), Technology Manipulation (Caused a black-out), Fate Manipulation with Totems (Can entwine the fates of two individuals (if one gets hurt, so will the other), though this requires them to directly ingest the totems), Soul Manipulation (Harvests the souls of his victims after killing them), Telekinesis, Teleportation (Creates a green flash when teleporting), Paralysis Inducement with Stasis Stones (Can use several stones to form a circle, and use it to trap victims by luring them into it), Explosion Manipulation with Dwarkstones (Dwarkstones are extremely volatile and its explosions are strong enough to reduce a Troll to ashes), Mind Manipulation with Pixies (Pixies are minuscule, glowing creatures that are capable of entering a person's head and induce vivid hallucinations), Power Stealing (With The Mark of Angor Rot; when painted on a target's face, he is able to control their abilities/weapons), Body Control (Can detach his eyes from his sockets in-order to spy on his target), Darkness Manipulation (Creates a shadow for him to pass through so he can avoid sunlight), Immunity to Soul Manipulation (Accidentally destroyed the Inferna Copula which contained his soul, loosing his soul in the process)

Attack Potency: Small Building level+ (Burst through a roof. Staggered Aarghaumont with a kick and is able to trade blows with Post-Transformation Jim)

Speed: Subsonic (Fast enough to keep up with a speeding automobile and a scooter at full speed. Caught a crossbow bolt point-blank)

Lifting Strength: Class 25 (Wrestled with Draal, who can briefly grapple with Bular, who threw and lifted trucks with ease)

Stamina: Fairly High (Chased a car throughout Arcadia yet showed no signs of exhaustion)

Range: Standard melee range, dozens of meters with energy blasts, several kilometers with portals (Was able to travel from California to Florida with his portals)

Intelligence: Genius (Angor Rot is both a skilled swordsman and a cunning strategist; as shown where he is able to wield Daylight with proficiency and even defeated Jim with it. He is able to use his Golems and have them fight his opponents just to analyze their fighting style. He uses his Pixies and Golems to cause chaos and divert attention away from him, as seen during his final assault at Trollmarket with his Golems and in Arcadia Oaks High with his Pixies. Angor Rot has slain and claimed the souls of previous Trollhunters, a testament to his skill and competence)

Weaknesses: Sunlight, which turns Trolls into stone when fully engulfed. The Inferna Copula can be used to control him (though it was destroyed by him). While his Golems can regenerate from any damage done to their body, they can be instantly killed if their Totems are destroyed (which is located in their "chest")