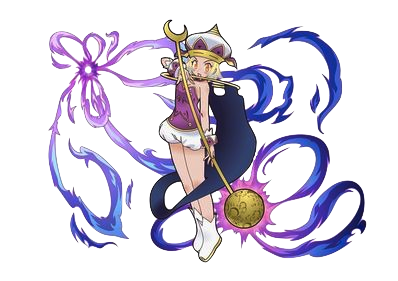 July 2002. The King of Terror descends from the sky and King Angolmois awakens." Angol Mois is the "King of Terror", who is ditsy and insecure as a result of her impact from space. She was sent to planet Earth to arrive in July 1999 for Earth's destruction, as predicted by Nostradamus, under orders from her father. She states that during her first appearance she told Nostradamus to deliver a message to the humans warning them of her arrival. In the anime, she arrives 500 years too early and takes a nap in orbit, until she wakes up in 2005 3 years too late. In the manga, she lands near Fuyuki, while in the anime, she lands on Giroro's tent. In both, she is taken into the Hinatas' home, where she is nursed back to health by Natsumi. When she wakes up, she reveals her true form and begins to destroy the Earth, until Keroro, who arrives later, is persuaded by Fuyuki to stop Mois. She is close friends with Keroro, who she calls oji-sama, which means, roughly, "Uncle". Tamama often competes with her for Keroro's attention (and affection).

Her transformation sequences, stylized costume, and related accessories may make her a parody of the "magical girl" genre. As an added note, Mois' Pekopon-form wears a hair clip explicitly in the shape of the Science Patrol's Ryuusei-mark in the anime (while Asami whose form/soul she "borrowed" has an Ultra Garrison-mark hair clip). Her name is frequently used in puns on the Japanese phrase moe-moe, which usually refers to a cute girl who appeals to older members of the audience.

Tier: At least 5-A, possibly higher

Speed: FTL (Should be comparable to Keroro as she's been with him and dealt with the same threats.)

Striking Strength: At least Large Planet Class, possibly higher (Can casually bust planets with a few thumps from her staff. She can increase the staffs power up to 100x)

Standard Equipment: (Angol Mois has her cellphone which can change into a spear with Large Planet busting capabilities.)

Weaknesses: Angol Mois can be weakened by a purple stone called the Angol Stone. Similar to Superman against Kryptonite.

Retrieved from "https://vsbattles.fandom.com/wiki/Angol_Mois?oldid=4916052"
Community content is available under CC-BY-SA unless otherwise noted.