VS Battles Wiki
Register
Don't have an account?
Sign In
Advertisement
in: Tier 10, Tier 10-B, Characters,
and 7 more 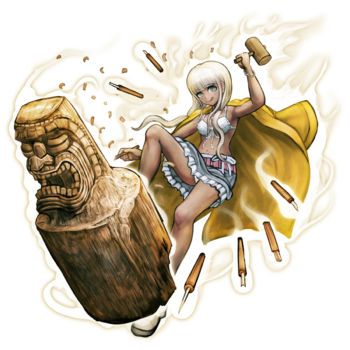 Angie Yonaga (夜長 アンジー Yonaga Anjī) is a student in Ultimate Academy for Gifted Juveniles and a participant of the Killing School Semester featured in Danganronpa V3: Killing Harmony.

Angie has the title Ultimate Artist (超高校級の「美術部」Chō kōkō-kyū no “bijutsu-bu” lit. Super High School Level Art Club Member). She claims that her art is work of Atua, ("God of the Island" in the Japanese version) rather than her own.

Powers and Abilities: Social Influencing (Was able to create a cult during the Killing Game, convincing some of the students to join it with just her words, although the more rational characters didn't join her side), Likely Fear Induction with paints (Her paintings have the ability to horrify people to the point that they faint)

Stamina: Average (Carves through stone, wood and wax, showing no signs of fatigue)