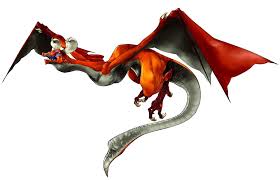 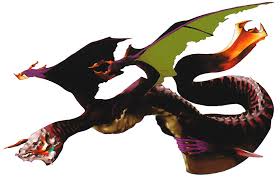 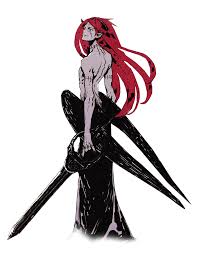 The dragon is arrogant and aloof as befits a creature which is acknowledged by all as the lord of the natural world and is charged by the gods to destroy all those too weak to deserve life. She is forced to set aside her disdain for inferior creatures when Caim offers her a pact which will save both their lives.

Angelus, known as Angel in the Japanese version, is a red dragon and the heroine of Drakengard. She is the pact-partner of the main protagonist, Caim. Because she is a dragon, she is arguably the most powerful playable character in the game.

Attack Potency: At least Mountain level+, likely' Island level (She is also superior to the dragons who in year 858 destroyed the Roman Empire overnight according to an official book which left in a state of disrepair beyond recovery. Which is proven when she is able to kill a Wyrm, an ancient and powerful dragon variety. By getting angry , she caused a massive explosion . Powerful dragons like her can fight Intoners which are more powerful than Manah who is a fake one)

Speed: At least Superhuman with at least Massively Hypersonic combat speeds and reactions (Should be far superior to Manah)

Lifting Strength: At least Class T (Should be far superior to Manah)

Durability: At least Mountain level+, likely Island level (Survived a massive beating from Legna, another dragon like her. Killed a Wyrm which was one of the dragons who destroyed the Roman Empire. Survived cannonballs hitting her )

Stamina: Very High, cut through the forces of The Empire and participate in lengthy air battles without tiring

Intelligence: Very High, has lived through 10,000 years worth of history and is said to be more intelligent than Caim who is smart in his own right

Weaknesses: Elf Blood is a mild poison for dragons, it is enough to cause them extreme discomfort however it is hard to exploit this weakness as it is though to pierce Dragon Hide

Retrieved from "https://vsbattles.fandom.com/wiki/Angelus?oldid=4106564"
Community content is available under CC-BY-SA unless otherwise noted.