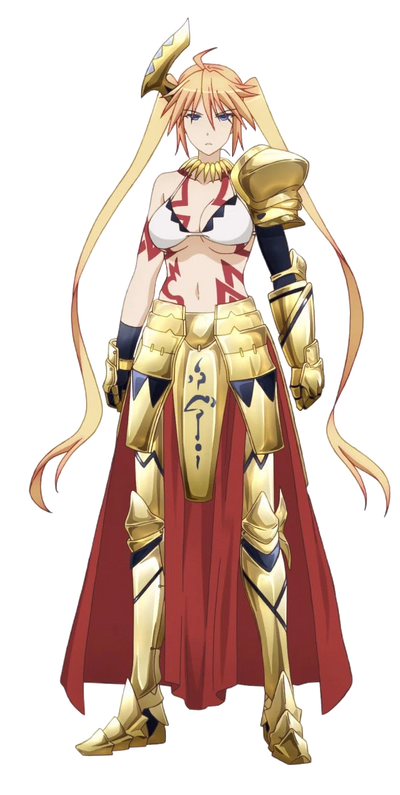 Angelica Ainsworth is the elder sister of Julian Ainsworth of the Ainsworth family. She was born years before the events of the main story and, later after passing away from unknown causes, was put inside a doll to move around in and serving emotionlessly to the other members of the Ainsworth family. She is also the Class Card holder of Gilgamesh since the time of the Fifth Holy Grail War as well as one of the enforcers of the family alongside Beatrice.

Tier: Low 7-B. Higher with the Gate of Babylon. High 6-C with Enuma Elish. 5-B with full power Enuma Elish

Attack Potency: Small City level (Inherited Gilgamesh's power, which should make her this strong). Higher with the Gate of Babylon (Should be comparable to the normal Gilgamesh's, which was able to easily kill Heracles and easily shatter Medea's barriers, which are stated to be as strong as Heracles body, like glass. When used by the corrupt Gilgamesh, they were capable of easily piercing through Bazett's enhanced defense, which has allowed her to tank all of Illya and Kuro's attacks including the latter's Triple-Linked Crane Wings). Large Island level with Enuma Elish (Weaker than Gilgamesh's but not incomparable, used it to destroy Shirou's Reality Marble). Planet level with full power Enuma Elish (Should be comparable to Child-Gil's)

Speed: Massively Hypersonic (Can react to and keep up with Illya, Chloe, and Shirou's attacks)

Standard Equipment: Everything within the Gate of Babylon.

Intelligence: Due to being a doll and having lost as much as ninety percent of her emotions, Angelica appears and behaves as a calm and cool-headed person. With this, she is able to calmly assess the battle before her and keep a calm composure while continuously using the Gate of Babylon's ability to shoot out numerous weaponry to overwhelm her foes in a manner similar to that of Gilgamesh. Just like Gilgamesh, Angelica is also not limited to using weaker weapons in the Gate, opting to more powerful weapons like the Divine Constructs of Ig-Alima and Sul-sagana to crush her foes with, or use the latter's ability to burn across an entire forest section. She can even use the Ainsworth Spatial Displacement magecraft spell of Flash Air in a number of ways, such as creating spatial portals to have the Gate of Babylon's treasury go through them interchangeably in increase their speed or use it around herself so as to have attacks go pass through her harmlessly.

Weaknesses: Although Flash Air is useful for defense, it is unable to defend attacks that are not in Angelica's field of view as Kuro was able to disappear by teleporting underneath her on Shirou's Ig-Alima and stabbing through it to hit her from behind. While she possesses Ea, it is not as powerful as Gilgamesh's when using it.

Magecraft: As part of the Ainsworth magus family even after her passing, Angelica specializes in the use of magecraft through one of the Thaumaturgical Systems called Alchemy, magecraft that focuses on the art of studying and manipulating the flow of matter. In her family lines case, they specialize in the use of Flash Air, a form of displacement magecraft that substitutes something for another. Though it is thought of as a basic, low level type magecraft, only few users use it, with said few being those belonging to the Ainsworth who specialize in its displacement use, which they've showed it uses in many different ways.

It has been shown to be used to switch out the souls of any they capture and putting them inside a doll while placing a pseudo personality inside the original's body. Other uses shown enables the Ainsworth to displace doors and windows in reverse, as well as create portals for attacks to pass through the user harmlessly out to another, as well as displacing space to have attacks shot or thrown at them go out in another direction or have the attacks be sent back to the enemy by displacing a portion of the space around them.

Gate of Babylon: The King's Treasure: The great treasury of Gilgamesh, housing the countless treasures of the world, opened with the Key of the King's Law, Bab-ilu. It contains countless Noble Phantasms and their prototypes, as the legends of all heroes are derived from Gilgamesh in some way, and allows Angelica to fire them as ranged projectiles from portals. This is further supplemented with Angelica's own Flash Air, which allows her to accelerate their speed through the use of portals. While it lacks Noble Phantasms that were made before Gilgamesh's time, such as Divine Constructs like Excalibur and Vasavi Shakti, or Noble Phantasms made from a Servant's personal achievements like God Hand, it nonetheless contains their prototypes, as paradoxical as that may be. However, simply possessing them does not grant Angelica the knowledge of how to wield them, and the treasury was split between her and Child-Gil after his manifestation.

Notable items within the Gate of Babylon include:

Enkidu: Chains of Heaven: A set of chains named after Gilgamesh's closest friend in life that were made to bind the gods themselves. Under normal circumstances, they are typically only fired as an exceptionally strong chain, summoned from the Gate of Babylon to bind opponents without much chance of escape. As an Anti-Divine Noble Phantasm, it becomes more powerful if its targets are divine, such as demigods like Heracles. However, Angelica has currently lost the use of this Noble Phantasm as a result of Child-Gil reclaiming it.

Sword of Rupture, Ea: The single most powerful Noble Phantasm in the Gate of Babylon, a Divine Construct named after the Sumerian god Ea, who stabilized the World during its genesis billions of years ago. Despite its name, Ea predates the very concept of a "sword" and can more accurately be described as a "staff", due to bearing a cylindrical "blade" with a dull tip and independently rotating segments with three lithographs that each represent heaven, earth, and the underworld while together representing the universe. Unlike the other Noble Phantasms in the Gate of Babylon, which were passed down to others across history, Ea is a weapon only Gilgamesh himself has wielded.

Retrieved from "https://vsbattles.fandom.com/wiki/Angelica_Ainsworth?oldid=6973442"
Community content is available under CC-BY-SA unless otherwise noted.